For the last couple of years, summer has brought two welcome certainties to Cleveland jazz fans: three weeks of warm weather and the return of the Cleveland Jazz Project. Last seen at Nighttown in June backing singer/pianist Hallie Sinclair, CJP was freed this time out to explore the aggressive spirals of the type of angular modern jazz for which they have developed a loyal local following.

To that end, saxophonist Nathan Davis and pianist Jacob Bergson came to the bandstand armed with new material. But they got things started with the John Klenner/Sam Lewis standard "Just Friends." Davis led the way with repeated volleys of open metal sound, tracing the melody through staccato spasms. His extended exploration, dissection and reconstruction of the tune gave due notice to anyone who might have wandered into the room unaware: this ain't no clumsy collegiate recital—sit up and pay attention! The attack of drummer James Muschler evolved throughout the number, following a progression at once inspired and natural. Like a string of small yet not insignificant scientific discoveries, the shifts in the texture and dynamics of his drumming often surprised in the movement then, upon reflection, became lodged within a redoubtable continuum. While perhaps featured too heavily in the mix, Muschler's singular voice on drums continued to impress throughout the evening.

Davis' "Who Knows," a warm alley-cat blues, found Bergson pounding into the fray with heavy chords that dropped into a tuneful drive and then aggressive, melodic loops. The group followed with "I Like That," another Davis original in which the saxophonist ran the register in fast yet expressive sprints, jabbing into the mid-range, smearing the high-end with squawks and opening the depths to full-throated growls. (Such calisthenics would reach their fruition in the third number of the second set, a tune Davis cut and rearranged with cubist flair.) The first set concluded with "Monk's Mood" and "Rudolph Goes West," the two split by an extended, thundering solo from Muschler. 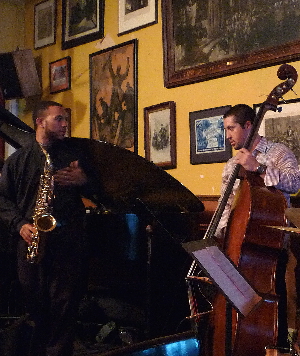 Nathan Davis and Christopher Mees
The group's attack was not tempered by the break. They opened the second set with an angular exchange of an untitled Bergson original that left gaps for bassist Christopher Mees to step to the fore. A moodier chord was struck on a second untitled Bergson tune (christening suggestions were petitioned from the crowd) that somehow swayed through disarray. At first seemingly a sax vehicle, the piece later gave way to Mees' bass and metal screeches scraped in rings from Muschler's cymbals. The following tune brought Davis' aforementioned soloing gem, but also featured nice melodic lines from Mees and had Bergson spiraling fleet, right-hand figures that countered in their fluidity the cut-glass statements of Davis. Bergson carried his complex high-end flights over into Davis' "Wonder Blues," constructing buoyant pianistic webs to bounce Davis into R&B-edged lines riding Mees and Muschler's vaguely '70s-era groove. 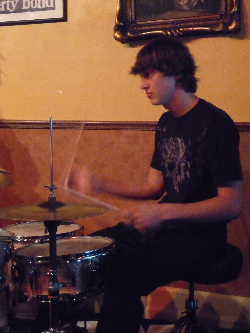 "All of Me" and a vibrant yet wistful tune dedicated to Muschler's girlfriend closed the set. The whole performance was an exhilarating track meet of music from a band showing no intention of resting on its local laurels. The new music penned by Davis and Bergson, and worked to its fullest by the whole of CJP, was not the plaything of amateurs looking to satisfy their friends; it was complex, invigorating material that could elbow in for room at any jazz table. One couple in the audience even claimed the music had the force of inspiring their betrothal. (As a James Joyce worshiper, I had to appreciate the symmetry of saying "Yes" at the Ulysses-inspired Nighttown.) All said, it was a hot night and a victorious return to the bandstand for CJP. Summer is good in Cleveland.