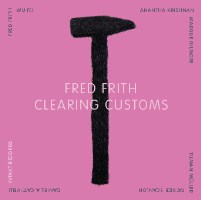 Over the decades of his solo career, Fred Frith's music has grown more reflective of the range of his musical interests. As well as being an improviser of significance he has also shown an interest in a diversity of folk musics, with initial signs showing up already, in his work of the late 1970s.

Clearing Customs might, in a sense, be a culmination of the process started back then. An unusual instrumentation enhances the singularity of the single hour-long title piece, and the deployment is something else. The eruption of sound at the 3:24 mark has the effect of disrupting the previously tranquil mood, but the discontinuity this implies is no issue in light of the overarching concept. The trio of guzheng, uncredited female vocalist (or electronics), and guitar is, by contrast, a sober but somehow uneasy affair, which could be the consequence of a balance precariously struck.

It could be argued that Tillman Muller's trumpet plays a role similar to Miles Davis' in the early-to-mid-1970s, but the comparison takes something away from the singularity of this music, especially as it's shot through with a very different strain of poise to that shown by Davis' groups at that time. During the lengthy passages when Tillman is silent, there's a kind of tranquility about the proceedings which, given Frith's way, prove only to be a kind of punctuation point. The stagnation which occurs at around the 13:30 mark has an ambient air about it, although the rhythmic repetition is offset by Frith's guitar and, eventually, Tillman's trumpet. Operating outside of the tempered realm, the electronics have the effect of subverting the known, particularly as all the musicians are skilled at avoiding the obvious. The proceedings get a little elegiac around 19 minutes, followed by neutered funk and a very different strain of lyricism.

Frith has always maintained an interest in longer forms, despite the brevity shown by much of his music on record. Clearing Customs summarizes this interest, but for him—and indeed his fellow performers on this record—the journey continues.