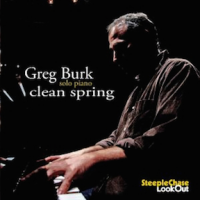 Pianist Greg Burk has built quite a discography as a leader, including solo albums and his latest, Clean Spring will only further burnish his reputation as a deep player and thinker. In a very real sense, this album is a homage to Burk's mentor Paul Bley, who had an obvious impact of Burk's musical attitude and playing, but who also helped Burk pick out the tracks for the album in the months between the actual recording sessions and his death in early 2016.

A relatively direct and easy comparison can be made between the current release and Burk's previous solo recording, The Way In from ten years ago. Both albums contain freely improvised pieces as well as those which were pre-composed, but given a fresh interpretation. The earlier record's notes emphasize the mindset of "non-doing," meaning action which flows effortlessly because the performer is completely in the moment; Clean Spring has much the same feeling, but the recorded sound in much brighter and sharper, and the playing is more direct and forceful.

Of the fourteen tracks (the album is just over sixty-eight minutes), five are pre-composed ("Song For Iaia," "Blues For Yusef Lateef," "Clean Spring," "Serena" and "Escher Dance") and occupy, for the most part, the first half of the album. Thus, there is a feeling, as one listens to the album through, of moving from structure (either melodic, harmonic or rhythmic, or some combination of these) to a more amorphous, tone-painting feeling, using much rubato and pedal.

The distinction between the two types of tracks is not always clear cut. "Solo Una Camminata," for instance, has a very clearly structured and beautiful melody, lushly harmonized, with some extremely pungent, delicious dissonances. "Four Reasons" which shares the honors with "Camminata" as the shortest track, can be heard as of type similar to the former track in that the melody which is heard between the waterfall, overlapping line sections which descend to the bowels of the piano, has a similar kind of arc, but is twisted and bent this way and that. Perhaps the brevity of these tracks comes from the improvisational impulse finding (stumbling onto?) a structure and the tension between free form and structure just could not be maintained as long.

"A Simple Question" is anything but simple as the melodic line continually switches hands as does the pseudo-contrapuntal line. This conversation continually moves forward and develops freely but logically. While Burk acknowledges Bley as a mentor and source of inspiration, he did not want imitate, but rather pay homage; this track is perhaps the closest to that feeling.

Tonality is a very fluid thing in Burk's hands. While there pieces with obvious harmonic progressions which are reinforced by phrase length and meter, all which imply a "key" ("Song For Iaia" and "Blues For Yusef Lateef" for instance), "Serena," a gorgeous ballad named after Burk's wife, is the longest track and stretches the sense of key pretty far while never quite letting go. On the other side are free form pieces that are strongly tonal ("Tonos"), and others ("Amore Trovato," "Ionosphere" and "Out At Night") that have enough of a tonal center for "out" notes to be heard as such.

Burk's musical mind is extremely rich and deep, with many crossing currents flowing through it. Although Clean Spring has many beautiful melodies and harmonies and much overt and implied structure, it requires a real letting go of any expectations combined with a paradoxically active, but effortless listening to let the music flow.