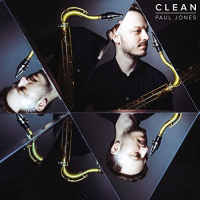 When saxophonist Paul Jones delivered his literature-indebted debut—Short History (Blujazz Productions, 2014)—it marked him as an intellectually curious seeker, eager and willing to walk a different path. With Clean he goes even further afield, utilizing minimalistic ideals, mathematically-oriented compositional methodology, post-millenial hip hop influences, and jazz language to create a whole that's wholly different from anything out there. It's a giant leap forward in terms of artistry and concept.

Jones spent the early part of 2016 at the Banff Creative Arts Centre in Alberta, Canada, sussing out the shapes and sounds that would come to form and define this record. His listening diet at the time—a menu that included Kendrick Lamar's To Pimp A Butterfly (Interscope, 2015) and the work of master minimalists like Steve Reich and Philip Glass—would have a major impact on the project, both in terms of instrumental vision and flow. Lamar's ability to create an arc instead of working with strict forms inspired Jones to look differently at the shape of a song and an entire album, and the minimalist's lingua franca, a language built on hypnotically looping motifs that develop in kaleidoscopic fashion, helped to serve as a foundational belief in both foreground and background. As for the mathematical component at play, Jones extended his notes-to-letters-to-words assignment system that was in play on earlier works, upping the improvisational quotient by putting a random number generator into the mix. It all may sound a little too cerebral, but it's not. Jones has a way of blending all of these influences and concepts together without allowing intellect to overpower or desensitize.

Clean wastes no time in setting itself apart, opening on a prismatic chamber miniature—"Ive Sn Th Gra Md"—tied into the aforementioned compositional system. While this title and two others read as gibberish to the eye, they're actually just pruned collections of words from quotes—in this case, a slight twist on the opening line of Allen Ginsberg's "Howl." As the album moves on, it offers myriad opportunities to see how Jones develops different aspects of his vision. Other gamboling vignettes are threaded into the mix—"It Was Brgh Cold," "Romulo's Raga," "Im Prety Uch Fkd," "The Minutiae Of Existence"—but it's the longer works that give Jones a platform for bringing a jazz sensibility into the picture. The title track, for example, opens on the layering of ostinatos before the seas eventually part to give Jones' saxophone and Glenn Zaleski's piano a stage. Jones' solo statement reveals a marked increase in confidence from where he stood three years prior, finding him driving in different directions as he pleases while Zaleski, bassist Johannes Felscher, and drummer Jimmy Macbride spur him on. "Trio" works off of a simpler base, building on a meditative foundation while allowing Macbride to paint loosely with his drums; "I Am An American" takes its name from the first line of Saul Bellow's The Adventures of Augie March while also playing to current complexities in that very notion; and "Hola, Amigo," directly following the Bellow-influenced work, sets up a tense meditation and rub built on cultural separation and fear. Ultimately, there's great artistic currency to be found in these and other threads in this music.

On paper, this one sounds like it could've been a confused mess. Jazz thoughts penned with the ink of Glass, Reich, and Lamar? A personnel shuffle built on an on-and-off blending of a core sextet with a unique chamber group or a saxophone quartet? Compositional systems tied to literature and thrown into a blender? There's no shortage of ambition in all of this, but ambition doesn't go anywhere on its own. Humanity carries ambition forward, and Paul Jones brings an extraordinary human quality to bear in this most enterprising work.