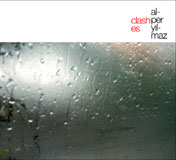 Bassist, composer and arranger Alper Yilmaz chooses to profile the compositions on his debut release as leader by using two quintets with the same instrumentation. One has musicians from Istanbul, the other from New York. Michael McGinnis is the exception, being the only common member besides Yilmaz. While this is interesting, the impact can only come from the strength of Yilmaz's compositions and the way in which the musicians interpret and extend them, and the bassist is well-served by his two groups.

Yilmaz, who is based in New York, uses several styles. There are the folk idioms of Turkey, funk and smooth jazz. With his arrangements giving the soloists ample room to rove, the CD comes off pretty strong.

Yilmaz sets up a funky bass groove on "KuKE in contrast to the cool symmetrical lines of Michael McGinnis (soprano saxophone) and Nick Kadajski (alto saxophone). Kadajski moves it into a darker arena, short bursts changing intensity and thrusting forward as he gradually gives his movement discernible body and then, an incendiary force. McGuiness fans the heat with a slew of inventions. Structure has been disassembled convincingly.

Clashes rises slowly. Once more it is Yilmaz who sets the tone. He sings a wordless song, the melody molded from the musical fabric of Turkey. David Binney essays it on alto saxophone, probing and then dissecting. He seeps in the melody, whirling the notes in an eddying tide, even finding time for a little "Sugartime. McGinnis is the perfect foil and complement, lightening the hue while encompassing the spirit of the innovation. Like "KuKe, this is an outstanding tune.

Junk Mail is effervescent and funky. Binney once more brings his particular feel and presence to elevate the song. However, the attraction is not complete without Jon Davis, who lets his Rhodes sing happily to add a nice sparkle.

While "Landscapes is a showcase for Yilmaz's technique on bass, with loops and effects, it is all to the good. He opens out on "Oddity to show his skills to a more pronounced degree. He lets melody take hold of his journey. He is neither obtrusive nor abstract, and so, makes a compelling contribution.