BY ERNEST BARTELDES
August 18, 2012
Sign in to view read count 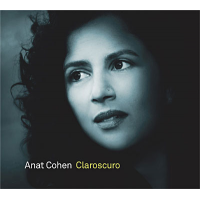 Reed multi-instrumentalist Anat Cohen seems equally comfortable performing Brazilian jazz with Duduka Da Fonseca's quintet, contemporary jazz with her two brothers in the Three Cohens, or Afro-Cuban and more straight-ahead material with the countless ensembles with which she has worked over the years. Claroscuro reflects Cohen's unique ability to tackle multiple genres with the same dexterity.

This is immediately evident with pianist Jason Lindner's "Anat's Dance," a contemporary tune with a Latin-esque feel that allows Cohen to stretch her own creativity as well as showcasing the band's chemistry. Cohen, Lindner and drummer Daniel Freedman add their own individual moments, with the tune coming to an abrupt end as the piano and drums suddenly stop, leaving the bandleader to deliver the final note. Cohen travels to New Orleans with a down-tempo version of "La Vie En Rose," played as a duet with trombonist Wycliffe Gordon, who sings it in a fashion very similar to Louis Armstrong's cover of this classic Edith Piaf song in 1950.

Among the Brazilian material is the Antonio Carlos Jobim/Vinicius de Morais/Chico Buarque de Hollanda ballad "Olha Maria," which is played here in a very subtle arrangement that evokes Jobim's original treatment. "Um x Zero" is a favorite Pixinguinha choro from downtown Rio de Janeiro's famous "rodas de samba," played in a double-time duet by Cohen and clarinetist Paquito D'Rivera, whose instruments are placed in different channels as they solo against each other.

Also notable is "As Rosas Nao Falam," a Brazilian standard by Cartola, a legendary composer whose work is not well known to North American audiences. Cohen plays its mournful, bluesy melody (the original Portuguese lyrics speak of being reminded of a long lost love by smelling the perfume of roses) with great feeling, followed by Lindner and bassist Joe Martin, whose solos do not stray far from the song's general melancholy.