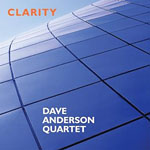 Having built a reputation as an exceptional reedman in Seattle, Dave Anderson presents a sparkling debut on the melodically rich Clarity, alternating between alto and soprano saxophones on eight original compositions and two covers. Having performed extensively throughout North America with luminaries like Jim McNeely, Clark Terry and the late great Mel Torme, Anderson moved to Seattle in 2005 from his native Minnesota, forming Dave Anderson Quartet after a one-nighter at Egan's Ballard Jamhouse. The group consists of pianist John Hansen; bassist Chuck Kistler; and drummer Adam Kessler, with Thomas Marriott taking to the flugelghorn in a guest appearance on "Wabi-Sabi."

Anderson's compositions are impressive, offering a varied selection of tones and harmonies, though he chooses to open the set with Joe Henderson's spicy samba, "Y Ya La Quiero," exploring it with his soprano voice, masterfully accompanied by Hansen. The frontline duet of Marriott and Anderson (again on soprano) on "Wabi-Sabi," is something sweet and special, while "Stalemate" is the first tune to display Anderson's alto chops, and presents Kistler's first solo.

Hansen is certainly no slouch here either, providing more of his crisp clean lines with an extended run on the reverend up-tempo burner "Troubled Angel," where the leader weighs in on another strong performance, again on the alto. One of the album's many highlights is the intimate piano and soprano duet on the lofty "The Aviator," offering both musicians the opportunity to explore individual flight patterns over the clear blue skies of Clarity. "Osby-an," and "Free"—played with two distinctly different tempos and rhythms—provide convincing evidence of Anderson's skills as a composer.

Dizzy Gillespie's "Beautiful Love"—the only other standard here—finds Anderson wielding the soprano with a gentle and graceful manner befitting the title of the piece, and delivering five minutes of pleasure. "Juror Number 2" jumps right out with a burst of alto and an opportunity for Kessler to stand out with several solo statements, but calms down with a short bass line, before reforming its hard-bop texture. "Moving On" is a beautiful, brief closer that ends much too quickly, at just a minute-and-a-half.

There's a large selection of genres across the spectrum of jazz, and sometimes musicians blur the lines in well-intentioned, ambitious attempts to provide the latest in jazz music. Dave Anderson Quartet avoids such pitfalls with a clear and convincing modern jazz masterpiece of a debut, Clarity, a recording of exceptionally creative charts and marvelous musicianship that's sure to garner its fair share of critical acclaim.