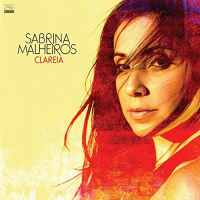 Although Sabrina Malheiros is best known for Brazilian dancefloor hits, Clareia crafts a smooth, warm and mellow expedition through the soul music of her homeland. Clareia also brings together different neo-global-soul generations and geographies: The soulstress either wrote every song alone; with her father Alex, bassist in Brazilian fusion legends Azymuth (who also contributes bass and guitar); or with co-producer Daniel Maunick ("Dokta Venom"), whose father Bluey leads London's soul-jazz mainstays Incognito.

Clareia is the summation of many seemingly small things done well, especially by wind players Leo Gandelman and Marcelo Martins and pianist/keyboardist Kiko Cantinentino (also on loan from Azymuth). In the bright "Celebrar," a colorful musical beachball that bounces on a shoreline breeze, flute dances with Malheiros's voice in the same light and airy, beautifully Brazilian sound. "Renascerá" uses sleigh bells (honest!) as the shimmering bridge between its instrumental introduction and first vocal verse; they come back in later with percussion, bells and cymbals to polish "Renascerá" from the inside out.

"Ultraleve" sounds both primal and exotic, with the Azymuth stablemates ripping up and throwing down riffs. Acoustic guitarist Ze Carlos Santos (who the singer calls "the best guitarist I have ever worked with") subtly shades her wispy vocal in "Em Paz," delicately dusted with twinkling stardust from counterpointing acoustic piano. "Vam' Bora" is a lot of fun for a long slow moan, its guitar warbling rubbery and wobbly acoustic blues, first doubling her voice and then slithering through this brassy, bluesy melody.

Clareia crosses and connects musical genres and generations with dexterity and grace. "I hope Clareia brightens the soul of whoever listens to it. That's the spirit of this album," Sabrina suggests.

"The album's title represents an appeal to the minds of our civilization today," concurs Papa Alex, "to clear our thoughts for good and for peace."