BY THOMAS EARL
January 9, 2018
Sign in to view read count 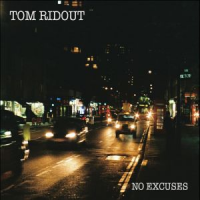 The name Tom Ridout may be familiar following his appearance in the Final of the BBC's Young Jazz Musician Competition in 2016. His sister, Alexandra, went on to win the Award. Any hard feelings have been set aside, however, with both siblings featuring on Tom's debut album, No Excuses.

Opting for diversity over continuity, No Excuses weaves through a range of styles and influences, from Jazz-Rock fusion to traditional English folk. "What It Would" is a highlight, its lilting string bookends belying a driving 6/8 chorus that lends real movement. Tom Ridout strikes a reflective vibe on tenor saxophone, moving lyrically and purposefully through Will Barry's beautifully coloured changes.

"Is and It" provides an opportunity for Alexandra Ridout to stretch her legs. The young trumpeter does not feel any need to scream and howl for attention; her warm, understated tone already speaks volumes.

"Known No More" offers an extended look at Rob Luft, another NYJO stalwart and one of Europe's rising young guitarists. Luft's inimitable technique provides the platform to develop his myriad ideas, which unfold with poise and imagination all over the neck. "Respite" is a fitting finale, with leader Tom (now on recorder) treating us to angelic lines which rise and rise into the ether.

Sometimes young musicians, striving for their own sound, lose touch with the beauty of jazz. No Excuses avoids this trap. The album is an assembly of talented musicians taking us through an array of moods with the energy and unboundedness of youth. Tom Ridout's technical accomplishment is clear, but he doesn't need to prove it so often. If he can further mature the narrative abilities he so evidently possesses, Ridout the elder will be very exciting indeed.

Blackbird; No Excuses; What It Would; Is & It; Scarborough Fair; No; Known No More; Blackbird (Reprise); Respite.