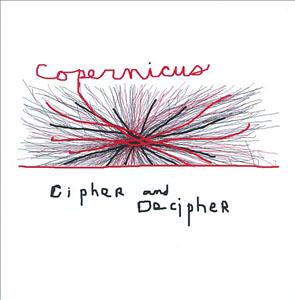 For those new to work of New York City performance poet Copernicus (aka Joseph Smalkowski), Cipher and Decipher, might be an appropriate onramp. This release of improvised music plus poetry appears to be aimed at a wider, more cynical audience than those that pioneered the form in previous decades in the jazz world, such as Gil Scott-Heron. Copernicus' dramatic voice, plus the healthy presence of guitars also provide an alternative rock improv dimension that could easily fit alongside prophetic English goth rock bands like Nick Cave & The Bad Seeds. Copernicus, however, spends no time brooding on race relations, politics or macabre, diving, instead, straight "Into The Subatomic."

Neither singing or speaking, Copernicus projects high volume powerful phrases that would not be completely out of place at a theatre reading or in front of an evangelical church. There is a compelling obsession breathed into every word. The intense delivery of this universal analysis of humanity requires a strapping in for serious listening. The rewards unfold, as the music and words are more unpredictable, with Copernicus playing foil to the ebb and flow of the band.

Musical Director Pierce Turner heads up a 13-member backing group that also features guitarist/backing vocalist Larry Kirwan, from the Irish rock group Black 47. The music was recorded on a single day in November, 2008, in Hoboken, New Jersey, from which Disappearance (Moonjune Records, 2009) was also culled. Cipher and Decipher is, however, a more improvisational exercise that challenges Copernicus to a higher level, as he leads the CD off, ranting and riding on the rapid rhythm beat of "Into The Subatomic." "Free at Last" brings in a slower rock feel, with the guitars and saxophones adding empathetic warmth. "Mud Becomes Mind" completely changes things up by bringing in a catchy South American beat that jousts with every spoken phrase. The 15-minute closer, "The Cauldron," is where all of the subtle elements of the band bear out, fully supporting Copernicus to the very end of his wits.

Cipher and Decipher will not date easily in terms of themes; Copernicus is clearly a man out of time, expressing his views on a world gone wrong. There is enough abstract, homegrown philosophy to make even political paranoia radio host Alex Jones curious. Although not a humor-filled disc, this may be the most prolific release of 2011.

Into the Subatomic; Free At Last!; Mud Becomes Mind; I Don't Believe; Matter Is Energy; Comprehensible; Infinite Strength; Where No One Can Win; Step Out Of Your Body; The Cauldron.