By Dan Bilawsky
November 30, 2017
Sign in to view read count 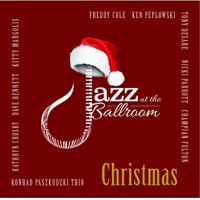 'Tis the season. Just ask Jazz At The Ballroom. That Bay Area-based non-profit arts organization is making spirits bright with this collection of music showcasing top-flight artists who've appeared in its concerts. Everybody from the illustrious Freddy Cole to the supremely suave Nicki Parrott to the bright-eyed Champian Fulton gets in on the action. Good vibes abound and surround across these sixteen succinct tracks.

Most of this material is comforting as can be, going down as easy as a cup of hot cocoa on a December night. Cole waltzes along with merry sentiments and gives guitarist Randy Napoleon some space on Ray Parker's "Jack Frost Snow," Parrott brings a touch of rumination into the picture with Vince Guaraldi's "Christmas Time Is Here" and takes a playful turn with duet partner Tony DeSare on "Baby, It's Cold Outside," and Fulton, who gave unto us her own winning Christmas album in 2017, delivers a relaxed-as-anything "What Are You Doing New Year's Eve?" laced with bluesy sentiments.

All three of those artists appear elsewhere on the program with positive results, but they're hardly the only winners here. Clarinetist Ken Peplowski delivers a playfully sophisticated and purposeful "Carol Of The Bells" that's as much a showcase for his well-wrought lines as it is for his rapport with pianist Ehud Asherie, Kitty Margolis rings in the holidays with casual trips through "Have Yourself A Merry Little Christmas" and "Let It Snow," and up-and-coming pianist Konrad Paszkudzki, who also happens to serve as Jazz At The Ballroom's Artistic Director, brings a dose of cheer with his own "Fireside Sizzle." Add some second or third helpings from some of the aforementioned artists, clarinetist Dave Bennett's take on "The Christmas Song," and Kathryn Crosby singing and speaking of her late husband's trademarked "White Christmas," and you have a recipe for warmth. Jazz At The Ballroom's While Christmas is a relatively muted affair as holiday albums go, it strikes just the right mood for a holiday that invites joy and reflection in equal parts.

Jack Frost Snow; Christmas Time Is Here; O Christmas Tree; What Are You Doing New Year's Eve; White Christmas; Santa Claus Is Coming To Town; Carol Of The Bells; Have Yourself A Merry Little Christmas; Baby, It's Cold Outside; Winter Wonderland; Let It Snow; The Christmas Song; The Christmas Waltz; Fireside Sizzle; O Tannenbaum; I'll Be Home For Christmas.