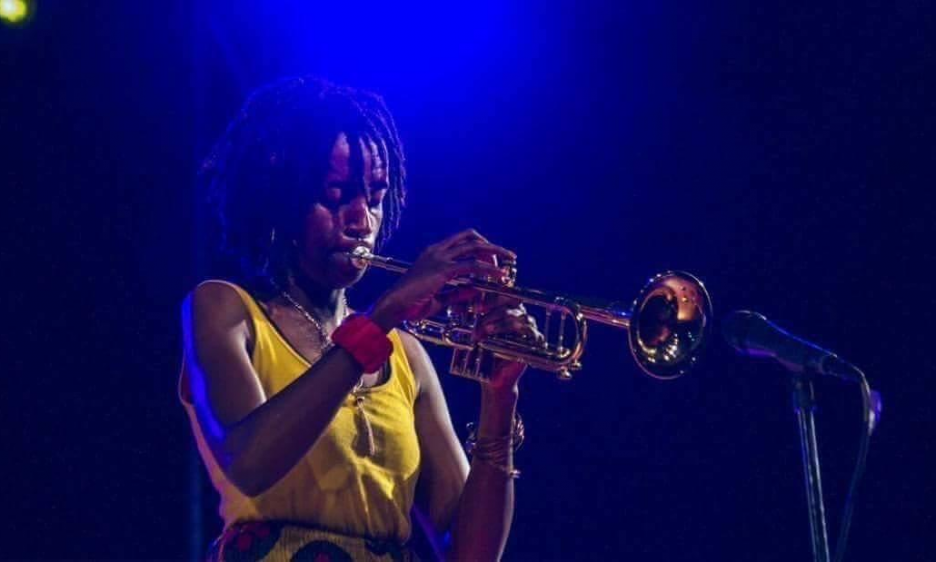 By Nicholas F. Mondello
January 27, 2022
Sign in to view read count
In the blockbuster film, Black Panther (Marvel Studios, Walt Disney Pictures, 2018) the power of and quest for "Vibranium," an all-powerful element, plays a pivotal role. Like a latter day female T'challa (The "Black Panther") and through her music, Kenyan musician Christine Kamau delivers a unique and powerful perspective of her own, melding jazz with its ancient and current African roots. The results are intriguing, inviting, and offer much for listeners to discover and enjoy.

An award-nominated trumpeter, saxophonist, and composer, Kamau has already made a name for herself on the African continent and her reputation as an ambassador for exciting Afro-Jazz is expanding worldwide. She started playing piano at 9 years old and had a solid inclination to and appreciation of music. She began formal music lessons when she was 11 at the Nakuru Players Theatre, a long-established arts centre in Kenya. Surprisingly, trumpet was not her first instrument of study; it was classical piano. Later, she would add saxophone to her arsenal of instrument skills. Doing so, Kamau joined the ranks of jazz greats such as Benny Carter and Glenn Zottola and the legendary Nigerian multi-instrumentalist, Fela Kuti, who was also a trumpeter playing jazz before switching to saxophone and creating Afro-Beat. Kamau's skills were enhanced as she transcribed his trumpet solos from the albums, Fela Kuti and Koola Lobitos.

Kamau grew up listening to the different genres of music in various languages that were being played on local radio and TV. The music of many diverse artists was popular in Africa at that time. Some of the most noteworthy were groups such as Them Mushrooms, Yvonne Chakachaka, Brenda Fassie, San Fan Thomas, Kanda Bongoman, and many others. The great South African artist, Hugh Masekela was also a significant influence on Kamau's development. She diligently transcribed many of Hugh Masekela's compositions, some of her favorites being his "Uptownship," "Spring," "Happy Mama," "Sister Fania," and "Moz." His discography of 20-plus albums was an invaluable resource. Kamau especially loved Masekela's distinctive approach to his trumpet playing, especially his signature choice of notes, phrasing, and trills. His distinctive voice and style became an artistic inspiration for Kamau. She admired how, aside from being a global music icon, Masekela addressed social issues through his music; citing worker exploitation in "Stimela," calling for Nelson Mandela's release through "Bring Him Back" and, later in his career he addressed the depth and the preservation of African culture, heritage, and languages. Kamau regularly salutes Masekela in her performances by playing his iconic hit, "Grazing in the Grass."

Kamau, leveraging her substantial musical background and desiring to move into the professional world, put together her own band in 2010. However, becoming a professional musician for her was more a series of serendipitous events. She always knew that she wanted to be a musician. However, there were too few mainstream artists in Kenya that had carved out a solo music career playing an instrument for her to have a clear picture of what such a musical career path would entail.

While still studying classical piano, a friend introduced her to an American pianist, John Chapman, who was living in Nairobi and playing jazz with his ensemble. Chapman encouraged Kamau—who was prepping for a piano recital—to switch from classical to jazz during her first lesson after she played George Gershwin's "I Got Rhythm" for him—it being a piece that she had learned off sheet music.

Her jazz studies set her on the trajectory to compose original melodies that were well-suited for horns. That led her to more trumpet-playing. Kamau's defining moment musically was in 2008 when she went to a Berklee College of Music scholarship audition in Durban, South Africa. It was during her brief time there that she became more familiar with the vast repertoire of South African Jazz music by African Jazz pioneers Zim Ngqawana, Moses Taiwa Molelekwa, Sibongile Khumalo, Mosa Jonas Gwangwa, and many others. She was taken by how those artists brilliantly fused their South African music with jazz. Returning home from Durban with many CDs, she immersed herself with the sound that had captivated her. She now had a clearer direction on what was possible got her in terms of Afro-Jazz.

Kamau formed her first band, African People in 2010 and performed numerous gigs with them. The group disbanded in 2013. Her first album, This is for You (Self Produced, 2012) is an instrumental Afro-Jazz album. It was recorded live in studio in Nairobi with Cameroonian music producer, Romeo Kouemeni. Kamau played trumpet on all eight songs and saxophone on "Baba Afrika"—dedicated to Hugh Masakela. American Jazz and African rhythms and melodies play a significant part across the album. All of the main melodies are pentatonic, which is typical of melodies from East Africa. There's Benga guitar -a highly-stylized type of Kenyan guitar playing with high range riffs -on "African People," "Baba Afrika," "Do What you Want;" Rhumba rhythms on "Ulisema," and chained II-V harmonic progressions on "Nakuru Sunshine." Kamau composed all the music and did the arrangements. The album and Kamau's playing in general have an inherent joy, energy, and happiness to them. The music is inviting, rhythmically stimulating, and has a generally upbeat feel.

The BBC featured Kamau in their program, Africa Beats in 2012. It was a 12-part series showcasing emerging musical talent from Africa. Kamau had just organized and held her first ever solo concert at the Kenya National Theatre concert hall when she was invited to be part of the feature. The program was a boost to Kamau's music career. She performed her original composition "Conversations" for the program.

Kamau has also been deeply influenced by American jazz musicians, including four trumpeters she cites in particular whose artistry and to whose trumpet playing had her gravitating: Lee Morgan, Miles Davis, Freddie Hubbard, and Roy Hargrove. She particularly acknowledges Morgan's solos and how Hubbard would—in her own words—"own it every time he was on stage; there is just something magical listening to a trumpeter play at the apex of what is humanly possible on the horn." The late Roy Hargrove is Kamau's absolute favorite American jazz artist. His compositions and beautiful playing struck Kamau deeply. Additionally, other American instrumentalists have influenced her including Herbie Hancock, Gerald Albright, Marcus Miller, Kirk Whalum, and Esperanza Spalding. Spalding happens to be that one particular artist that Kamau's wishes to perform with one day.

As a composer, Kamau does not follow a specific process. However, she has written a lot of music on the piano. The piano for her is an important creative step. It allows her to be as open as possible to whatever is heard in her mind and lets it go wherever it leads her creatively.

Kamau has toured extensively. She has performed across East Africa in Rwanda, Tanzania, Ethiopia, Zanzibar, and Uganda, as well as other parts of Africa, including Nigeria, Ivory Coast, and Cameroon. The experience of her playing music with musicians from other cultures fostered her appreciation for intercultural collaborations and connections. She came to the United States in 2019 as a speaker on a music panel at Georgetown University in Washington, DC. Also, trumpeter Dave Douglas invited her to perform on the online version of his New York Festival of New Trumpet Music. It was a great experience for Christine to be part of a broader community of trumpeters. Kamau is working toward expanding her career reach internationally. In terms of upcoming projects, her next major effort—a studio recording of her instrumental compositions—is scheduled to be released later in 2022.

Christine Kamau's music is a unique, joyous, amalgam of African, rock, jazz, and ethnic components that assuredly will have a universal appeal. This is indeed an International star on the rise.