Nearly four decades ago, a precocious young brassman who played a Leblanc trumpet caught the attention of Vito Pascucci, then president and now chairman and CEO of G. Leblanc Corporation. A blurb in the March, 1960, Leblanc Bandsman, a forerunner to the Leblanc Bell, reported:

“Young Glenn [Zottola] has certainly begun to carve a lasting mark for himself in the trumpet world, and it goes without saying that talent such as this is bound to make itself known on an even wider scale in the near future. Remember this young artist’s name! You’ll be hearing it often in years to come as Glenn Zottola’s abundance of talent becomes tempered with that invaluable ingredient called experience.”

These words proved prophetic indeed. Pascucci followed Zottola’s career and watched as the hot young phenomenom who captured so much attention went on to become one of the most respected, versatile and in- demand trumpet players—and saxophonists—in the music world.

Born and raised in Port Chester, New York, Glenn started playing trumpet at age three. By virtue of his musical household, this seemed almost as natural as learning to speak. His big brother, Bob, was also a gifted trumpeter who went on to play with the bands of Charlie Barnet and Maynard Ferguson. His mother, Marie, played piano, and his sister was a gifted singer.

But it is his father, Frank, to whom Glenn points as his primary influence and teacher. “He was a great trumpet player in the Louis Armstrong and Conrad Gozzo style,” says Glenn. “As a child, he was taught by a music professor in the strict style of La Scala, Milan, and he was required to study theory, harmony and solfeggio before he was allowed to even touch the trumpet.”

Later, Frank Zottola made a name as an arranger, writing charts for the innovative Claude Thornhill orchestra, among others. “Dad also has an impeccable hand at writing music notation, and music publishers used his manuscripts to make their printing plates.” When the score for Stravinsky’s Petrouchka was smuggled into the U.S., it was Frank who prepared the autograph, or printer’s manuscript. The multitalented Frank Zottola eventually became a maker of world class trumpet mouthpieces.

To his son, Frank passed on a love of swing music and a legacy of the big warm tone for which Glenn is well known, as sound that has been described as reminiscent of Louis Armstrong, who was also an early hero. Added to Glenn’s strong affinity for the swing-era sensibility were bebop’s complex harmonic concepts, to which he was introduced by his brother. “I came home from school and heard Bob playing a record by [bebop trumpeter] Clifford Brown, and I knew my life would never be the same!”

Though musically gifted, Glenn led a largely normal childhood reinforced by strong family values. But attending public school was an adjustment for the budding virtuoso. “It was a great shock to me when I arrived at school and found that not every kid played the trumpet,” he recalls. While his friends were playing baseball, Glenn could usually be found at home instead, playing at jam sessions with his family and the other musicians who often stopped by and the early MMO record series to which he attributes a large factor in creating his personal style.

The prodigy made his first appearance as a soloist at age nine with the Westchester Community Orchestra, under the baton of his father. The following years won Glenn much experience and notoriety, including an engagement with trumpeter Bobby Hackett’s band (“my first big gig”). When he was 13, he found himself in the national spotlight as a three-time winner of the Ted Mack Amateur Hour, winning a place on the television show’s national tour and opening the door for numerous broadcast appearances.

At 17, Glenn struck out on his first full-fledged “road gig” as a trumpeter with the Glenn Miller Orchestra, under the direction of clarinetist Buddy DeFranco. “That job really gave me my first taste of real life, of what it was like to be a working musician, traveling on the bus and playing one- nighters. And it was inspiring to hear Buddy play clarinet every night.”

From the Miller band, he joined Lionel Hampton’s big band, and then spent the next few years backing a string of big name stars like Frank Sinatra, Bob Hope, Patti Page and Mel Tormé.

In 1977, a move to New York found him in demand as a freelancer and pit-orchestra musician. Glenn began a phase of his career that included playing trumpet in Broadway musicals such as Evita, Annie, Barnum and Chicago. But while many musicians thrive in this uniquely demanding environment, Glenn found it stifling to his creative nature. He took a respite from Broadway in 1979 to tour with the Benny Goodman sextet, which gave him valuable visibility. Afterwards, he resumed his show work, but in 1982, he got out of the pits, both literally and figuratively.

At that point, Zottola flexed his creative muscle by creating a production company that employed 70 musicians at its peak. “Financially, it was a very successful venture,” states Glenn. “I was booking more than 300 gigs per year, including six nights a week with my own big band at the Rainbow Room in New York.” But the success had its downside. “I was working 60 hours a week. I didn’t even have time to buy a reed for my saxophone.” Sensing career burnout approaching, Glenn sought counseling from Scientology, the religious philosophy to which he subscribes and attributes much of his success.

“I discussed it with my professional career counselor, Diane, who later became my wife. We realized that from the day I started playing, I’d been groomed to be a soloist, a jazz musician. All my training led up to that. I figured it was time to do what I felt was best and to stop listening to others who thought they knew what was best for me.” Following his own ear, he took a chance and made the decision to become a full-time band leader and soloist for the first time since he was 13 years old.

The gamble paid off, and Glenn found himself greatly in demand leading his own successful groups (including his own big band), recording 30 albums both as a leader and with many jazz legends, and touring nationally and internationally with all-star groups. The list of musicians he has played or recorded with reads like a who’s who of jazz: Gerry Mulligan, Chick Corea, Milt Hinton, Bob Wilber, Count Basie, Ella Fitzgerald, Zoot Sims, Joe Williams, Frank Sinatra ,Tony Bennet—and the list goes on.

Aside from being a world-class trumpet player, Glenn’s value and versatility as a performer are increased two fold by his talent on the saxophone—a highly unusual alternate for a brass player. Audiences are always amazed and delighted to see the master trumpeter pick up the saxophone and play it with equal fluency and flair—and then switch back to trumpet, perhaps all within a few bars.

“When I was about 13,” explains Glenn, “I found an old alto lying around the house, and I began fooling with it.” He was much impressed by the intricate lines he’d heard woven by saxophonists like Sonny Rollins and John Coltrane, and his interest in the saxophone grew.

With no formal training, it wasn’t long before Glenn started feeling almost as at-home on the sax as on the trumpet. Aside from the obvious disparities, such as fingering and embouchure, Glenn notes that the main difference between the two lies in the mood each instrument can capture. “There are certain emotions I can express better on the sax than on the trumpet. The trumpet has a beautiful, majestic sound, but on something like a ballad, I might want that romantic, gentle, sensual feeling that I can get more easily on the saxophone. It requires a different frame of mind.”

Zottola’s doubling ability and his unique combination of influences and broad stylistic acumen are the basis of a formidably well-rounded talent, finding Glenn at home in nearly any musical environment, making him nearly impossible to pigeonhole. A typical Zottola CD presents the listener a potpourri of jazz styles. One track might find his muted trumpet emulating a moody Miles Davis, while the next will feature his blazing alto saxophone tearing it up à la Charlie Parker. Plus, there’s always room for his instantly recognizable big, warm trumpet sound as he honors the early jazz and swing masters.

“I’m proud of my versatility,” says Zottola. “It’s very much a part of who I am musically.” Versatility, however, is considered a marketing challenge by many record producers and concert promoters. “They tell me, ‘Man, if you played just trumpet or just saxophone, one or the other, it would be a lot easier to market you.’ But what am I supposed to do—give up something I love in order to sell more records? That’s just not going to happen.”

Today, Glenn Zottola is as hard to classify as ever. He continues to lead his own band, a “little big band” that comprises six horns and a rhythm section. The band performs its blend of styles regularly at international festivals and in gigs stateside, with the leader playing trumpet and saxophone. Glenn moved to Los Angeles to become the band leader on the Suzanne Somers TV show out of universal studios.

Ever alert for a chance to broaden his horizons, Zottola is particularly pleased by the resurgence in popularity of swing music and the bands that have produced it. “I’m happy to see these young musicians being so successful now playing the kind of music I love to play and was raised on,” Glenn says. “It’s made me realize that maybe it’s time for me to teach, to pass along the knowledge that I’ve gained.”

Glenn hasn’t recorded as a leader in a number of years, but true to his individuality and self-determination, Zottola will approach his next CD project with a different twist. “I feel I’m ready to enter another stage of my career. I’d like to do something a little more ambitious, with an orchestra, including strings and full horn section.” But true to his versatile nature, he assures us that no one particular style will be the album’s focus.

So, while some child prodigies burn brightly in that initial flash of brilliance only to fade away, Glenn Zottola has escaped that fate. He nurtured rather than squandered his enormous talent and emerged as an impressive and highly respected multifaceted musician. “There are just not many musicians who can do what I do,” he accurately notes. “But mainly—and I know this sounds corny, but it’s true—I just want to make the world a better, happier place through my music. Then I’ll know I’ve done my job.”

His fans would no doubt assure Glenn Zottola that he has done exactly that. 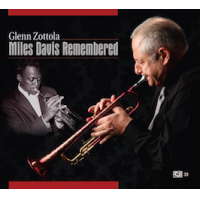 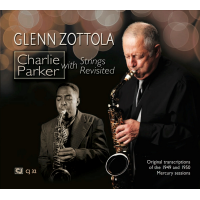 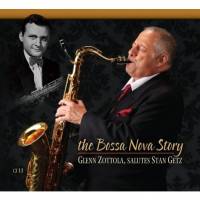 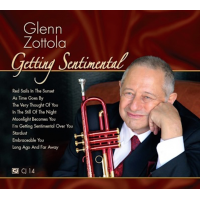 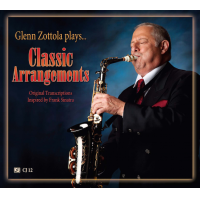 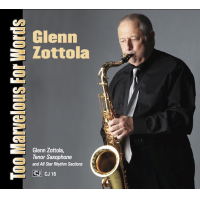 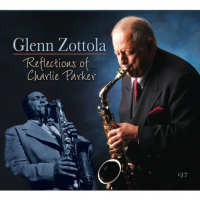 What Is This Thing Called Love?

From: Reflections Of Charlie Parker
By Glenn Zottola 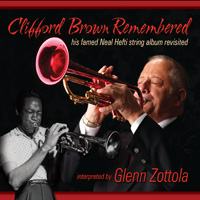 All About Jazz musician pages are maintained by musicians, publicists and trusted members like you. Interested? Tell us why you would like to improve the Glenn Zottola musician page.