By Eyal Hareuveni
October 31, 2013
Sign in to view read count 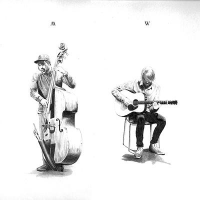 W/ M is a double album that feature two debuts as solo artists of two young and promising Norwegian improvisers, both spinning out of the creative environment around the Music Academy in Oslo. Guitarist Christian Winther, a member of the punk-jazz trio Ich Bin N!ntendo, genre-bending trio Monkey Plot and the free improvisers collective mummu, and double bassist Christian Meaas Svendsen, a member of the modern jazz quintet Mopti, the duo Duplex with saxophonist Harald Larssen, Andrea Kvintett and Paal Nilssen-Love's Large Unit. Both played solo and duo gigs together before recording this album. This album feature the experimental side of both musicians rarely demonstrated in their outfits. The two employ numerous extended techniques in order to expand their sonic palette and find their own sound.

Winther plays on the acoustic guitar only. He is fascinated by the sound of its strings, its resonance, the rhythmic options and its timbrel range when objects are attached to the strings, with different tunings of the strings or when playing the strings with a bow. Obviously, there are echos of seminal innovative guitarists as Derek Bailey, Fred Frith or Elliott Sharp but Winther opts for an original sound of his own.

The guitar becomes an endless sound generator in the hands of Winther, he places this instrument in a completely new light, distant from its traditional role. But Winther is much more varied musician than just an experimentalist. He is not shy of bridging the experimental and the abstract with the melodic and structured as on "Read," "How Rare to Bloom" and "Read More," a string of emotional pieces that can easily be associated with British folk guitarists Bert Jansch and John Renbourn or the American guitar legacy of John Fahey. The two duos with Svendsen on "The Tasty" and "Cloudberries" shine with inventive playfulness. On all the pieces Winther's playing is focused, concise, stressing on every piece on a unique sonic dimension, and varies it with restless, chaotic expressions but does not attached to any of it.

Svendsen's solo is even more surprising, given the more conventional role of his in Mopti, Andrea Kvintett and Duplex. He researches methodically the body of the bass and its bows, focuses on developing single ideas over time that inspires him to transform the traditional roles of the bass and pushes its sonic envelope to outer, richer regions. There are similarities to fellow Norwegian double bassist Ingebrigt Håker Flaten (especially his solo parts with the power trio The Thing or on his solo album Double Bass, Sofa, 2003). His physical approach to the bass, the emphasis on immersing in its deep tones, the addition of overtones vocals or his creative usage of the bows reference other great bass players such as Peter Kowald or Barry Guy. But Svendsen, like Winther, is already a mature musician with a sound of his own.

On "Ärt," together with Winther, he sketches an arresting lyrical texture and an abstract ironic blues scale on "C² Blues." "Double Rainbow," "Piazzacito" and "Prolonged Dots and Blunted Beams" are impressive examples of the total control that Svendsen has on the bass and his ability to produce new sounds out of it. "Bualog," with East-Asian kind of guttural overtones, is another methodical study of the capability of the bass to create enigmatic sonic texture.

W/ M was one of the last projects of Va Fongool label founder Eirik Tofte, who sadly passed away before the release of this excellent album. Still, true to Tofte's vision, Christian Winther and Christian Meaas Svendsen present music that challenges conceptions and conventions about music and creativity, music that is absolute, confined only by the imaginative limits of its performer and listener.