By JOHN KELMAN
January 6, 2015
Sign in to view read count 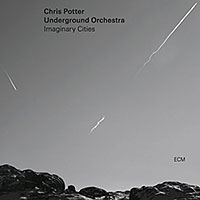 While he is, perhaps, best-known as a reed and woodwind multi-instrumentalist of tremendous power and versatility—the torch-bearer and logical successor, even, to the late, great Michael Brecker—Chris Potter has also demonstrated remarkable breadth as a bandleader and composer. It's hard to imagine that it's been only 23 years since the 44 year-old first came onto the scene with Red Rodney and began a career as a leader soon after with Presenting Chris Potter (Criss Cross, 1994)—the first of what is, with the release of Imaginary Cities, a substantial discography now numbering 18. But for every hard-blowing session like Lift: Live at the Village Vanguard (Sunnyside, 2004) there's been a Song for Anyone (Sunnyside, 2007), a broad-minded recording for string trio, woodwinds trio and guitar-based rhythm section; and for every incendiary studio blowing date like Critical Mass ( Dare2, 2006), with Dave Holland's longstanding quintet, there's Transatlantic (Red Dot, 2011), an ambitious large ensemble date with Denmark's DR Big Band.

Still, Potter's career took a major leap forward when he debuted his first album as a leader for Munich's venerable ECM Records. The Sirens (2013), where he deserted the electric energy of his relatively longstanding Underground group for an all- acoustic quintet date that, in its inclusion of two keyboardists—Underground's Craig Taborn, here solely on acoustic piano, and David Virelles, a relative newcomer to the scene, on prepared piano, celeste and harmonium—was ongoing evidence of Potter's drive to think and work outside the box.

And so, with Imaginary Cities, Potter continues to push the envelope, this time reconvening his Underground group with guitarist Adam Rogers, Craig Taborn and Holland band mate/drummer Nate Smith...but this time expanding it into the 11-piece Underground Orchestra with the addition of another Holland alum, mallet player Steve Nelson, two bassists and a string quartet led by Mark Feldman, whose What Exit (ECM, 2006) remains a career high point deserving of a follow-up.

It may feature the Underground group at its core, but with the exception of Rogers—who still generally favors a warmer, hollowbody electric tone rather than the sometimes grittier textures used in the Underground quartet—it's an all-acoustic ensemble like The Sirens, and so bears little intrinsic resemblance to prior Underground records Underground (Sunnyside, 2006), Follow the Red Line: Live at the Village Vanguard (Sunnyside, 2007) and Ultrahang (ArtistShare, 2009).

Little resemblance, at least, from a textural perspective. Still, the chemistry that Potter has honed over the past decade with Taborn, Rogers and Smith is still the fulcrum that acts as Underground Orchestra's leverage for action. The writing is suitably expansive and, while there is no shortage of finer compositional detail, there is still plenty of space for the ensemble to stretch out and play without restraint or constraint. The four-part "Imaginary Cities" suite that takes up nearly half of the album's 72-minute run time is Potter's most ambitious piece of writing to date, taking full advantage of every sonic and stylistic possibility available to him.

The classically tinged, string-driven opening segment to the balladic "Pt. 1 Compassion" builds, with potent inevitability, to stunning solo opportunities for both Potter and, in particular in this case, Rogers—making a terrific first-time showing on the label here and throughout the set—that's the closest thing to the fire and energy of the Underground quartet. The joyous pizzicato start to "Pt. 2 Dualities" resolves into an Afro- centric groove driven by bassist Scott Colley and Nate Smith who—with Rogers and Nelson's marimba blending into a wonderfully singular voice and joyous cross-rhythm—collectively bolster an extended and suitably fiery tenor solo, and a feature for Nelson that may have much to live up to coming, as it does, after Potter, but which actually manages to raise the bar even further. The first half of "Pt. 3 Disintegration" may be the freest music Potter has ever conceived, with cued themes and an early soprano solo supported by Taborn at his outré best and Smith playing with surprisingly reckless abandon, before the strings enter for a second section that, in its contemporary music leanings that slowly assume pulse and collective form, will come as a complete surprise to those who think Potter's interests lie solely in the world of the jazz tradition.

The final part of the suite, the aptly titled "Pt. 4 Rebuilding," begins with a thunderous groove from Smith and bass guitarist Fima Ephron that leads to a complex but more readily accessible conclusion to a 37-minute suite that's formidable in scope and conception, and cinematic in reach and evocative power. Potter delivers another epic solo, suggesting that when taken together with his earlier work on the record, he's simply incapable of delivering anything less. Rogers also takes a turn, building his solo from a simpler melodic construct but gradually injecting more dextrous phrasing to ultimately build to one of the record's most impressive and commanding climaxes...only to resolve into a coda where tempo and meter shift effortlessly along with color and texture, as Potter seems to find a way to use everything at his command, with shifting passages from subsets of the orchestra that build to a conclusion which peaks early and then winds down gradually...but satisfyingly.

One of the most significant—but rarely considered—aspects to making an album work—to give it its arc—is determining the amount of silence between tracks. Sometimes just a couple seconds will do...and ECM has, for decades now, used five second of silence at the beginning of its albums as a means of helping those listening to put away what's occupying their minds and prepare for what's to come. A full eleven seconds of silence divide the conclusion to Potter's "Imaginary Cities:" suite and "Firefly," one of three more pieces that bring Imaginary Cities to a close. The track seems to be closer, in complexion, to the music written for the Underground quartet but then the strings and vibraphone enter and, while the composition features more impressive soloing from Rogers, Potter and Nelson, it becomes clear that even with constructs that seem simpler than the suite that came before, Potter is finding ways to stretch the limit of his capabilities.

Both The Sirens and now Imaginary Cities also make clear that collaborating with producer/label head Manfred Eicher for his own projects has significantly benefited Potter. But while The Sirens was a worthy starting point, with Imaginary Cities Potter has created the first real masterpiece of 2015. A profound paradigm shift for the saxophonist, Imaginary Cities suggests that the end point of Potter's potential seems still very far beyond the horizon.