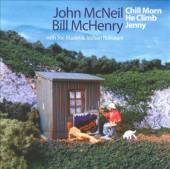 Navigating the wide avenue of American Song can be boring, because the same charts appear on album after album; but when musicians either pick little-known charts of the celebrated composers of the American Songbook, or add little-known composers to that musical tome, things get quirky, but utterly refreshing. This is exactly the case in point regarding Chill Morn He Climb Jenny, the anagrammatic title that would otherwise spell the names of thois quirky duo—trumpeter John McNeil and tenor saxophonist, Bill McHenry—together with bassist Joe Martin and drummer, Jochen Rueckert. Moreover, for this date the artists have also sought to feature some of the most widely known songs by the composers of those songs which feature a classic narrative drama over almost everything else. The duo has once again chosen to perform three compositions by Russ Freeman and one each by the inimitable Thad Jones, trumpeter and early John Coltrane collaborator Wilbur Harden, and Miles Davis (the mysteriously titled and simmering "Pfrancing") .

McNeil and McHenry, who thanks to the acronym do not sound like senior partners in a law firm, have made it known that the criteria for selecting the work for the album was not so much a classic song, but rather a chart that was written with a twist. John Blackburn and Karl Suessdorf's "Midnight in Vermont," for instance, broke the popular format for song, featuring two six-bar choruses instead of the customary eight bars, and also lyrics that do not rhyme. Russ Freeman's "Maid in Mexico" originally had choruses that used Latin meter, but with solos that were straight-ahead. Jones' rarely played "Three and One" is a mesmerizing rhythmic wringer that cuts loose in classic bebop fashion. Of course McNeil and McHenry reserve their most typically irreverent approach for the work they have chosen, infusing all of the charts with wry humor, spry, elastic harmonic shape-shifting and ingenious polyrhythm courtesy of Martin and Rueckert.

While this music may not seem an obvious fit for musicians such as McNeil and McHenry—who have favored an angular approach to music, following largely Ornette Coleman's harmolodic theories—they have ripped up the playbook and recast it favoring irony, humor and an almost childlike reimagining of even the most challenging American Songs. This is perfectly showcased in the performance of "Moonlight in Vermont," a lyrical song whose romance is in Suessdorf's words, but which are absent, replaced, instead by two characters: a trumpeter and a saxophonist who recast the scene with all its sensuousness.

There does not seem to be any stopping McNeil and McHenry, who have now followed up their earlier Rediscovery (Sunnyside, 2008) with Chill Morn He Climb Jenny. And the way is clear for another wild ramble through the American Songbook. After all they have only just begun.

Moonlight in Vermont; Batter Up; Aren't You Glad You're You; Maid in Mexico; Bea's Flat; Three And One; Carioca; Wells Fargo; No Blues (Pfrancing).