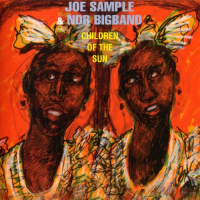 Toward the end of his remarkable career, the late pianist Joe Sample (he died on September 12, 2014) traveled to Hamburg, Germany, to record Children of the Sun, a suite of his own music, with the splendid NDR Big Band. The eleven compositions were inspired by Sample's appearance at the 1995 St. Croix Jazz Festival, where he weighed the beauty of that island paradise against the brutality of slavery (17th Century St. Croix was a crucial part of what is referred to as slavery's "middle passage") and the helplessness and hopelessness the captives must have felt. Sample thought something should be written to exemplify and underscore those extremes.

Seductive rhythms of the Caribbean predominate (especially early on) and are superbly managed by drummer par excellence Steve Gadd and the ensemble. This represents a slight departure for Sample, who wasn't widely known as a composer of Latin themes, but the genre suits him well. The NDR Big Band, for its part, proves again that music is a universal language, warmly embracing Sample's free-flowing West Indian-cum-jazz essays and bringing them emphatically to life. The enterprise is saliently enriched by Sample's lithe and swinging piano (he solos perceptively on five numbers) and the clear-eyed trombone of a second guest artist, Nils Landgren, who brightens the invigorating opener, "I Wanna Go Home," reappears midway through the album, on "Gold in the Cane," and solos on every number thereafter save one, "Creole Eyes." He is especially engaging on the slower-paced "Children of the Sun" and "Blue Abyss."

Trombonists Dan Gottshall, Klaus Heidenreich and Stefan Lotterman add brief solos on "Blue Abyss," as do bass trombonist Ingo Lahme and tenor saxophonist Sebastian Gille. Heidenreich is out front again, this time with tenor Frank Delle and trumpeter Ingolf Burkhardt, on the undulating "Creole Eyes." Alto Peter Bolte shares blowing space with Sample on "Buttermilk Sky" (not to be confused with the Hoagy Carmichael standard of that name), while flugel Claus Stotter does the same on "Islands of the Mind" and "Rumfire" (on which tenor Gille also solos). "I Believe In" is an even-tempered samba with self-assured solos by Landgren, Delle (soprano), Burkhardt, flugel Fiete Felsch and clarinetist Lutz Buchner.

Whether Sample reached his goal is beside the point (thematic music is invariably subjective). What matters most is that he has produced a commendable album of Caribbean-style jazz, proficiently performed by the NDR Big Band Orchestra, thus further amplifying Sample's already impressive legacy.