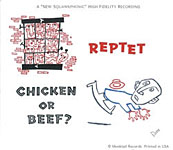 Free jazz and the avant-garde form an interesting and self-conflicted paradigm. All too often it seems musicians perceive the "free" aspect to mean that they must completely reject traditional music and become trapped in the ether of ambiguity, rather than perhaps accepting a loftier goal: the freedom to both use, and move beyond convention. Reptet is an exciting group which, judging by the music contained on the critically lauded Chicken Or Beef? has accepted that ideal—but only after having poked fun at anyone who would spend a paragraph entertaining such minutiae. Simply put, the album provides an hour of exciting, varied and expertly-realized music.

There is a refreshing awareness alongside a sense of unrelenting, yet effortless, energy to the compositions. This forms a strong and interesting contrast to their sometimes quirky nature. Harmonies flutter from tight unison to wide, yearning Wagner-esque sonorities in "Gwand Wabbit," all the while driven forwards by the exacting and infectious groove of drummer John Ewing and bassist Tim Carey. The lack of a traditional chordal instrument on a majority of the tracks in no way limits the music. The horns weave deft lines behind vivacious improvisations with far more interest and dynamic than could be achieved by a piano or guitar. The ensemble reveal a wide range of influences, from the explosive Mexican lament and dance on "Reptet Score!" to the jovial trombone-led masquerade on "That's Chicken or Beef" and the rocked up intro to "Fish Market."

As an album, it feels almost like a compilation, or a sampler of the band's more than obvious talent, and leaves the impression that they could easily release an entire record based on anyone of the themes explored. But this is not to say that it lacks cohesion, rather that they chose be trapped within one style, and have blurred the edges between the rest.

As to the question posed by the title: if you want fiery, spiced chicken, listen to some bop, and if you hunger for a beefier, more cerebral cut, look to the avant- garde. However, if you want both, along with a side from the expansive buffet of music, then Reptet and Chicken or Beef? Will provide a solid and exciting experience.