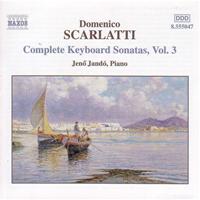 Hungarian pianist Jeno Jando may rightly be proclaimed the utility infielder of classical piano. He has on his resume all of Mozart's piano sonatas and piano concertos, every Beethoven sonata, every Haydn sonata, both volumes of Bach's Well-Tempered Clavier as well as Bartok's complete piano concertos. With this kind of output, one might surmise that maestro Jando would have recorded the complete Scarlatti sonatas himself, which, if Complete Keyboard Sonatas, Vol. 3 is any indication, would have been quite acceptable.

A byproduct of having such a broad repertoire is a conservative approach to the letter (or note) of the music. Jando is no exception to this. His Scarlatti is played on piano as the listener would expect to hear it on the harpsichord. In fact, so tart and precise is the sound in the opening four sonatas that they almost sound as if they were performed on the immediate precursor to the modern piano (hammerklavier), the fortepiano. Delightful is Jando's playing on the K. 261 B Major and K. 70 B-Flat Major sonatas, where his precise approach makes the piano sing (no pedals here). He achieves pounding fortissimos and bell-like pianissimos with equal aplomb.

Jando's conservative approach in no way dampens the musical personality beneath. Jando has a beautifully radiant tone and facility. He skips effortlessly through the K. 444 D Minor sonata with its allegrissimo pace. On perhaps the finest performance on the disc, Jando takes the K. 54 D Major sonata from Horowitz, making it a delicate elegy of memory and longing. Jando's thought is crystalline and his performance as delicate as smoke. This is a sublime five minutes of music.

The K. 203 E Minor sonata is beautifully modulated from figure to figure, through one of Scarlatti's more complex compositional structures. Jando carefully takes his time approaching what Scarlatti biographer Ralph Kirkpatrick called "the crux" before further elaborating the performance after it. Jando's sense of balance never allows him to hurry, producing performances of uniform rhythmic, harmonic and melodic density.

Jeno Jando was born in Pecs, in southern Hungary, where he was taught piano by his mother. This was followed by formal study at the Liszt Academy, under the tutelage of Katalin Nemes and Paul Kadosa. Jando experienced several competition successes including the Cziffra, Ciani, and Beethoven Piano Competitions. Jeno Jando was one of the first artists to record for Naxos when it was still a young company. At the time, the producers wanted to release some of the better-known Beethoven piano sonatas. After hearing Jando's demo tape, they chose him for the whole lot and a lot, lot more.

For introductory information on the Scarlatti Sonatas, see Domenico Scarlatti: An Introduction to the Keyboard Sonatas.