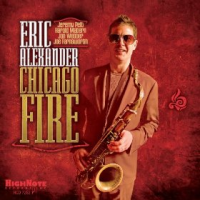 When weighing the merits of tenor saxophonist Eric Alexander, two words spring readily to mind: prolific and consistent. Alexander, an implacable workhorse even in his mid-40s, has since 1992 recorded no less than thirty-seven albums as leader of his own groups and appeared on many others as a sideman. As for consistency, Alexander has been widely praised, and rightly so, for his awesome technique and seemingly endless reservoir of eye-opening ad libs. In other words, he approaches every theme with the utmost precision and within his sphere has never been known to deliver a solo that is less than earnest and provocative.

Chicago Fire, on which Alexander salutes the city in which he earned his professional spurs after graduating from William Paterson University in New Jersey, is clearly no exception to that rule. Whatever the mood or tempo, spellbinding notes and phrases flow from Alexander's horn as smoothly as honey from a jar. After more than twenty years paying dues, he has reached a point at which prudence has long since given way to unwavering self-assurance. Alexander burns when he has to, plays the blues with unfeigned warmth and perception, and generally shows why his well-earned reputation as a musician who always delivers the goods is by no means misapplied.

No one, of course, can build a castle by himself, and Alexander owes much for the success of Chicago Fire to the constancy of his rhythm section of choice (pianist / mentor Harold Mabern, bassist John Webber, drummer Joe Farnsworth), with whom he has performed and recorded so often that the measure of their rapport is near-telepathic. The quartet is enhanced on three tracks ("Save Your Love for Me," "The Bee Hive," "You Talk That Talk") by the splendid young trumpeter Jeremy Pelt whose bright and perceptive solos add more spice to the menu, as do those by Farnsworth and Mabern (whose spoken dialogue with Webber about the late tenor Von Freeman and the heyday of Chicago jazz serves as a proper introduction to Alexander's warmhearted "Blueski for Vonski").

Mabern wrote "The Bee Hive" for one of the Windy City's once-thriving nightclubs, "Mr. Stitt" for the legendary saxophonist who spent a number of years in Chicago, mainly as part of a two-tenor tandem with Gene Ammons, while Alexander pays homage to another of the city's renowned tenors with "Eddie Harris." Alexander is masterful throughout, perhaps at his chops-testing peak on a warp-speed rendition of Cole Porter's "Just One of Those Things," showing again that when it comes to marvelous tunes, it's hard to beat the Great American Songbook. And when it comes to persuasive straight-ahead jazz with a Windy City accent, it's hard to beat the Eric Alexander Quartet and Chicago Fire.

Save Your Love for Me; The Bee Hive; Eddie Harris; Just One of Those Things; Blueski for Vonski; Mr. Stitt; You Talk That Talk; Don’t Take Your Love from Me.