By Glenn Astarita
February 1, 2000
Sign in to view read count 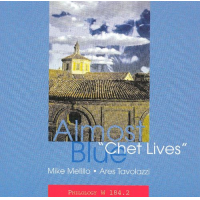 On Almost Blue: Chet Lives, pianist Mike Melillo and bassist Ares Tavolazzi perform a series of duets consisting of standards and one Melillo penned composition in tribute to his former employer, trumpeter Chet Baker. Simply put, the duo capture the essence of Baker’s sensitive lines, acute utilization of “space” via fluid yet at times sparse phrasing and despite Baker’s predominately downtrodden past, the trumpeter was a notorious romantic often expressed through his hip yet sensuous vocalise. Here, Melillio and Tavolazzi are up for the occasion as they summon the spirit of the late trumpeter while acquiring his sense of boyish fervor and subtle eloquence.

On “You’re My Thrill”, Melillo exhibits sleek, refined elegance while pursuing passionate lines that invoke thoughts of Baker’s imperturbable persona and warm phrasing as the duo proliferate the trumpeter’s West Coast cool mystique. Tavolazzi establishes the theme and sets the pulse during his bass intro to “But Not For Me” as he often reformulates the melody line while performing an extended solo. Here, the twosome alternate solo chores within the framework of a lively swing motif as Melillo displays a penchant for swift thematic development via deft yet intricate chord voicings along with Bill Evans – style, harmonic interludes. “The Booze In 12 Bars” features Melillo’s graceful swing sensibilities while integrating Bop-ish right hand leads throughout a colorful and quite cheerful groove. The composition titled, “Almost Blue” commences with serene and atmospheric vocalizing from guest artist Tiziana Ghiglioni followed by Melillo’s sophisticated utilization of dynamics on this pretty and quite sentimental ballad.