BY GLENN ASTARITA
January 18, 2015
Sign in to view read count 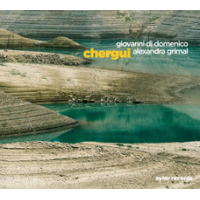 These duets by like-minded improvisers, Giovanni di Domenico (piano) and Alexandra Grimal (saxophones) were recorded over two-nights at a Paris theater, radiating classical recital hall-like sonic characteristics. Overall, these two-discs spotlight the artists' symmetrical encounters and intuitive dialogues, spanning core improvisational aspects, nouveau classical applications and jazzy choruses. Nonetheless, the musicians dig deep while interrogating each other's spur of the moment thoughts and supplying a collection of glistening contrasts, whether sublime or when they raise the energy level.

di Domenico is often the catalyst. He largely establishes mini-themes with introductory passages, outlined on jazz, classical and free improvisation, along with numerous deconstruction episodes with Grimal. Certain works are designed with swerving and dizzying opuses and on "Koan n°8," the pianist executes gorgeous phrasings, where the duo slowly drifts matters into a slightly foreboding impasse via a quietly vigorous chain of events. Yet each piece proposes a distinct variation, built on subtleties or fragmented movements. Hence, the musicians leave a lot of space for free-floating exchanges but seldom let the processes evolve into a dissonant battleground.

The duo yields succinct and polite exchanges during "Tema per Jan Svankmayer," complete with staggered cadenzas and lithely crafted ebbs and flows. Consequently, several works are somewhat stoic and inward-looking, although they inject swirling patterns amid a hint of bop, while raising the pitch with ascending extended notes on "Koan n°6." The preponderance of these works are engineered with keenly devised abstractions and enough variety to sustain interest, but the artists' also concoct a great deal of splendor and wonderment, partly aided by the crystalline audio production