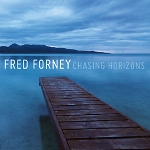 Phoenix, Arizona-based trumpeter/composer Fred Forney has performed with a host of jazz heavies, including Bob Mintzer, Don Menza, and Roger Kellaway, and has toured internationally with the Bobby Caldwell Big Band. Chasing Horizons is Forney's second release as a leader and debut for OA2 records. The disc is a high energy progressive jazz session featuring tenor saxophonist Brice Winston and pianist Chuck Marohnic.

Forney displays a matter-of-fact brassy tone, full of vigor. His solo ideas are confident and adventurous with Freddie Hubbard-like brashness. The opening barn burner "Nearly Human" and the straight-eighth Latin-funk title track are suitable vehicles for Forney's muscular approach. The brisk jazz waltz "Astoria" showcases Forney's staggering technique with fiery runs that seem to go on forever. The trumpeter shows a somewhat softer, introspective side on "Meditation No. 1" and "The Mystic." The latter has a strangely alluring charm with melodic muted trumpet and tenor saxophone stating the theme against dissonant harmony. Forney plays one of the disc's more inspired solos on "Fireflys," a post-bop/bossa groove with hints of soul.

Winston and Marohnic are wonderful interpreters of Forney's music, each soloing with a free-wheeling mentality. Winston has a meaty tenor sound with hints of Wayne Shorter, Joe Henderson, and Michael Brecker. The saxophonist shouts and moans on "The Simplest Things," stretching his ideas into declamatory statements. Marohnic's angular, hard swinging piano solo on "Astoria" and haunting solo intro on "The Mystic" are stand-out moments of the recording.

Bassist Dwight Kilian digs in hard throughout, rattling his strings with intense determination. Drummer Dom Moio sits decisively on top of the beat with cymbal work reminiscent of drum legend Tony Williams. The rhythm-mates are especially engaging on the hard-driving swingers "Nearly Human" and "The Simplest Things."

Chasing Horizons is a dazzling representation of a modern jazz quintet sound. The group concept Forney produces is contemplative of the past with a forward-thinking aesthetic.