By Troy Dostert
January 1, 2018
Sign in to view read count 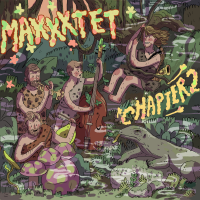 Finnish saxophonist/bass clarinetist Max Zenger's quartet, the Maxxxtet, shows on its sophomore release that there's a lot of room in modern jazz for an approach that puts harmony, intricate concepts and subtle rhythmic nuances ahead of passionate intensity and technical brilliance. This is not to say that the group lacks chops or ambition—but that these traits find their outlet in a less demonstrative delivery. The result is seven well-constructed compositions that unfold through unhurried, careful development: it's music that doesn't have to hit you over the head to make its point, and for that reason it is all the more inviting.

The group's first release, Chapter 1, was in some respects a more exuberant record, with a fair bit of bounce and verve. In contrast, Chapter 2's somewhat more restrained, pensive vibe takes a bit longer to ingratiate itself, but once it does so the music has real staying power. Often the tunes emerge through indirection, with composed and improvised sections both playing a role. The opener, "Varanus Priscus," is a good example of the group's effective use of composed phrases, both in harmony and unison, to create a trajectory; even though the piece generally stays at a simmer, never reaching full boil, there's genuine excitement nevertheless, due in large part to the dexterous drumwork of Joonas Leppänen, whose loose- limbed rhythmic sensibility, often punctuated with well-placed interjections, gives the piece a lot of its momentum and spurs some terrific solos from Zenger and trumpeter Tomi Nikku.

The album possesses a strong lyrical core, so the horns are pivotal; but so too is the bass of Teemu Åkerblom, which has its own graceful, supple aspects, heard to fine effect on "Vortex," where he gets to help define the melodic contours of the piece. And both Zenger and Nikku have deep emotional range, as the tenderness they bring to tracks like "Year of the Rooster" and "Z.E.N." delineates their softer edges. But the music never falls into sentimentality, as even on these ruminative pieces the group still makes room for some edgy improvisation: witness the opportunity for free-flowing dialogue that Nikku and Zenger deliver during the last couple minutes of "Rooster" as a case in point. Although Zenger plays alto sax on most of the cuts, when he does switch over to bass clarinet it adds another dimension to the music: the lower range of the instrument provides a deep- hued sonority to tracks like "Vortex" and "Tragikomik," in addition to creating another avenue for the two-horn harmonies in which Zenger delights.

At around 45 minutes the album doesn't feel overly long, but there's definitely a lot of music here, a testament to Zenger's attention to craft and each piece's skillful blend of composed and improvised segments. We'll be hearing more from Zenger, and this is a promising entry in his burgeoning catalog.