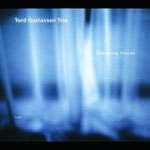 Whether by intent or coincidence—unlikely!—ECM Records has carved out a special niche for the jazz piano trio. With almost no exceptions, the label's trio records sound at once quiet and restless, introspective and searching. Leading the pack is American pianist Keith Jarrett's Standards Trio, with 14 records since 1983. Jarrett's insistent fixation on melody, especially in the context of the jazz canon, has become monolithic. Other pianists who have made significant contributions to the label's characteristically spare, crisp trio sound include John Taylor, Bobo Stenson, and Marilyn Crispell.

And so Changing Places, pianist Tord Gustavsen's debut, augurs both expectation and preconception. To be honest, both standards are met: the disc is uniformly persuasive and eloquent, yet emphatically softspoken and delicate. There are no big picture surprises here. (And for that, these three Norwegians should be proud.)

Of course, being a member of a pack like this does not imply any lack of personality. Gustavsen has a rootsy sound which relies more on implication than direct articulation, which means that relatively simple melodies carry more weight than their spareness might suggest. He tends to emphasize folk traditions, drawing from sources as disparate as gospel and Nordic music. A recurrent tango theme pops up on "Graceful Touch" and "Where Breathing Starts," for example, lending these two soft pieces a degree of accessible drama.

That's not to imply that the pianist lacks literacy in the more sophisticated aspects of the jazz tradition. He employs the tools of modern jazz, but without self-consciously drawing attention. Most evident is the degree of interaction among these three players. (Another time-honored ECM tradition, but most unusual in this era of flash and bang.) Harald Johnsen's first appearance on record foretells a fertile future for the bassist. Johnsen has a rare kind of intuition that no amount of education or training can produce—on most of these pieces, he assumes an interactive role where the bottom end can just as well become melody and harmony. That of course liberates the pianist to pursue his muse without any fixed responsibilities.

Drummer Jarle Vespestad, best known as one quarter of the open-ended electro-jazz group Supersilent, has a light but crisp touch. While he's constantly acting, reacting, and interacting with the other members of the trio, he seems least interested in stretching the roles of his instrument. Perhaps that serves his function as a sort of ground for the group.

Does the world need another articulate, soft-spoken, free-spirited piano trio? That seems like a silly question. Listeners who have amassed the entire ECM piano trio catalog may not find Changing Places a landmark, but then again there are hundreds of jazz players who would give their left leg to create music with this degree of sophistication.

Visit ECM Records and Tord Gustavsen on the web.