By Doug Collette
November 23, 2022
Sign in to view read count 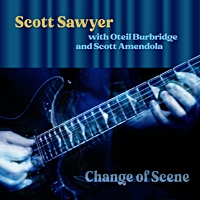 Notwithstanding a history including associations with the varied likes of famed jazz fretboardists John Abercrombie, and Chris Stamey of the veteran power popsters the dBs, guitarist Scott Sawyer may have the lowest public profile of the three musicians appearing on Change of Scene. Still, it certainly says something about his reputation, not to mention his chops, that he can attract the likes of bassist Oteil Burbridge (Col. Bruce Hampton's Aquarium Rescue Unit, the Allman Brothers Band), Dead Combo) and drummer Scott Amendola (Charlie Hunter, Wil Blades).

The trio's choice of material for this all-instrumental, sixth longplayer of the leader's is certainly in keeping with the diverse history upon which the collaboration is based. A gentle reading of Jerry Garcia and Robert Hunter's exquisite ballad for the Grateful Dead, "Stella Blue," fittingly appears right next to—and is of a delicate piece with—Miles Davis' "Nardis." (also give much cachet by the latter's one-time collaborator the late pianist Bill Evans). Meanwhile, a most dramatic take on The Doors' "The Crystal Ship" is the penultimate cut of the eight here, on an album with a running a total of some fifty-eight=plus minutes. The track makes for a fittingly emphatic conclusion.

It is indicative of the depth to Change of Scene that those numbers appear in the wake of the liquid guitar and bass lines plus light even-handed drum work on "Passing By." In its moody air conjured by the threesome's fluid interplay, it's an ideal opener as well as an effective setup to what is essentially a slow blues in the form of "Might Dom," and none of these three musicians are forced to strain in order to mesh.

Accordingly, there's no overplaying on a track like "What It Is." Sawyer, Burbridge and Amendola share a confidence that allows them to utilize the space between their respective instruments as effectively as the sounds. And, thanks to the engineering expertise of Jason Richmond, both audio elements become fully complementary. As do the most finely-etched touches on "Side Step," one the four Sawyer originals here, where the filigree in the musicianship is delicious. Such detailed action is the rule on this record, not the exception.

Eye-pleasing as is Carolyn Halbe's art design for this digi-pak, the cover photo adorning Change of Scene might more accurately depict the insinuating three-way dynamic behind it: a superimposition of images including bass and drums plus guitar perhaps? Still, there's no denying the logic of this collaboration or the subtle delight it affords upon (repeatedly) hearing it.

Passing By; Mighty Dom; What It Is; Stella Blue; Nardis; Side Step; The Crystal Ship; Under The Stars.