BY IAN PATTERSON
October 17, 2007
Sign in to view read count 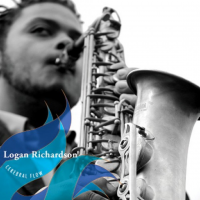 There is enough stated in the opening minute of unaccompanied sax which kicks off Cerebral Flow to suggest that Logan Richardson is going to make a name for himself. The track in question, "Turning Maze, may have provided a better title for Richardson's debut as leader, as his alto sax lines twist sharply, turn blind corners, and hits dead ends at velocity, in a dizzying display of virtuosity which may draw applause and raise eyebrows in equal measure.

Richardson's instinct is to stretch out and he does so without straying too far from the middle register of his instrument. At times his playing suffers from what in India they call "monkey mind —restless, and a bit too much going on, but more often than not he is inspired, playing solos of originality with verve.

The supporting cast of musicians is out of the top drawer; Nasheet Waits and Thomas Crane share drumming duties along with bassist Matthew Brewer, providing a powerful, effervescent rhythm section. Mike pinto on vibraphones comps tellingly and lays down some stunning solos while Mike Moreno's guitar lines breeze subtly in and out and even when playing at fast speeds, each note is well defined.

There is plenty of excitement in the playing. Sax and vibes race each other along parallel lines on "Urban Folk Song, gentle soundscapes are punctured by free-style blow-outs and sax and drums go head to head on "Like Water and "Free the Blues. Richardson's uninhibited playing exhibits breathtaking technique, though it sways towards excess at times.

However, beautifully weighted tunes like "Our Life Together, "In the Wall and the short but sweet title track show that when Richardson's cerebral flow slows down a tad there is much more to his craft than fire and storm.

Overall this is a very accomplished debut from an exciting young talent, whose wealth of ideas, originality and sheer daring, should mean that Logan Richardson is a name we will hear a lot more of in the future.

Turning Maze; Cerebral Flow; Urban Folk Song; Animated Concept of Being; Pacing Idiosyncrasies; Like Water; Release; Our Life Together; Free the Blues; In the Wall.