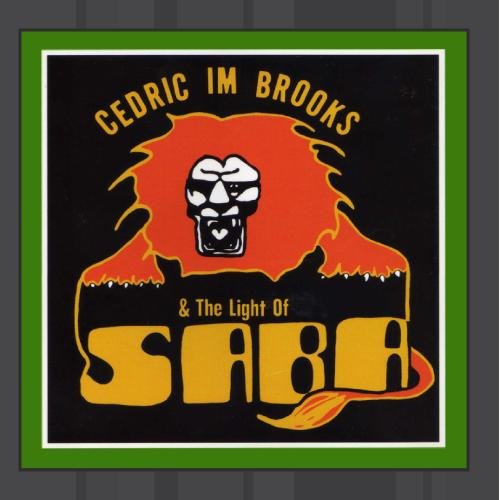 Another treasure trove of near-lost, jazz-infused, Caribbean-based masterpieces from the label which is bringing us the London Is The Place For Me series. This time the focus is Jamaica during the '70s and the sublime blackism melange that was Cedric Im Brooks' Light Of Saba band. Ska, hard bop, mento, Afrobeat, highlife, dub, roots reggae, and Rasta grounation music are fused together in an utterly unique, easy-skanking fashion that makes you want to shout for the joy of being alive.

Resident in the US during the late '60s, Brooks—then in his mid-twenties—hung on the fringes of Sun Ra's Arkestra for a while and was massively influenced by Ra's musical and band-as-a-community message. Back home in Jamaica, he formed, or played with, a string of roots outfits which mixed it up musically, composed collectively, and tried to live communally: his own first band, the Mystics, then Count Ossie & The Mystic Revelation Of Rastafari (he played on the band's legendary triple album), and then his own roots 'n' jazz band The Divine Light, which morphed into The Light Of Saba.

Although it mixes up a world of Caribbean, African, and African-American musics, there are distinctive constants running through the nineteen, mainly instrumental, tracks collected here. Grounation drumming underpins practically every tune, with fundes and repeaters in the forefront of the arrangements and traps playing a mostly supporting role. Brooks' saxophones and Calvin Cameron's trombone share the theme statements and most of the solos (though Barbara Boland's light and airy flute gets plenty of mic time too). Imagine the Skatalites featuring Don Drummond, Count Ossie, the Jazz Messengers, Hugh Masekela, and King Tubby... and you're getting the idea.

Classic cuts include (but aren't limited to) Cameron's chalice masterpiece "Lambs Bread Collie" and its dub "Collie Version"; the Fela Kuti-informed "Sabasi," with outstanding deep ska trombone from Cameron; a beautifully chilled treatment of Horace Silver's "Song For My Father"; Brooks' alto workout on the mento "Sly Mongoose"; a respectful but novel reading of the Abyssinians' "Satta Massa Gana," gorgeous piano and horns supporting a class Tapper Zukie-esque toast; the grounation drums and percussion features "Sound" and "Jah Light It Right"; and the completely out of the box, sui generis acoustic guitar showcase, "Sabayindah," a clearly wholly spontaneous outpouring of melody over a bass-heavy, deep ska horn arrangement.

Cultural roots music at its finest, and a total blast from start to finish.