Cathy Segal-Garcia: A Weaver Of Dreams

By Dan Bilawsky
November 18, 2019
Sign in to view read count
Cathy Segal-Garcia's talents are vast, and her heart is warm and open. A significant presence on the Los Angeles scene, she can proudly wear many labels —"vocalist," "songwriter," "educator," and "scene maker and sustainer" among them. But when you boil Segal-Garcia down to her essence, she's simply a weaver of dreams, a starry- eyed wanderer and free spirit who, nevertheless, possesses strong artistic instincts and the organizational savvy to pull off one unique project after another. A look at a sampling of her previous work—a debut date fronting a top-shelf trio, duo encounters of various designs, a genre-melding affair bridging jazz with pop and other realms, a beautiful brush with a chamber orchestra and some high-profile guests—reveals a restless explorer, as do these two 2019 releases under her name. 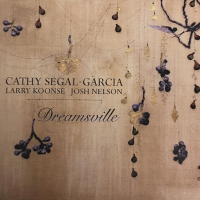 Perhaps the most absorbing date in her discography, Dreamsville finds Segal-Garcia flanked by two of the West Coast's finest—pianist Josh Nelson and guitarist Larry Koonse. Both men have extensive experience working with singers and they make for a perfect fit here, eyeing every possibility within these songs and working with—not behind—the vocalist.

This trio lives in and embodies the ethos of the titular space right from the first, on an absorbing take of the Henry Mancini-penned title track. It's a weightless, multihued wonder that flows and floats. "The Three Of Us"—one of two Segal-Garcia originals on the playlist—forwards the idea of a reflective and nostalgic tapestry that carries more and more sway with each sympathetic song that follows: First there's the intimate call of memories on "Canto Triste"; then there's a winding, wordless trip through Domenico Scarlatti's "Sonata in B Minor"; and that's met with a wonderfully-fanciful, counterpoint-infused "September In The Rain."

Much of the material that follows that opening stretch remains wistful in its wandering, and it's beyond beautiful to hear these three capture that spirit in sound. Whether we're talking about a bewitching "Zingaro" with spectral wordless vocals, the sighing sentimentalism of a guitar-and-voice take on "You Are There," or the pensive streaks in "Pensitiva" and "Beyond The Years," these three are in their element. Somehow, overcast skies clouded by the past manage to make Dreamsville appear as an even more idyllic hamlet than a sunnier manifestation might be. 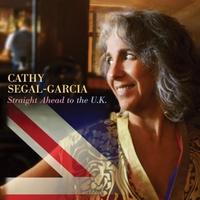 Cathy Segal-Garcia
Straight Ahead to the U.K.
Dash Hoffman Records
2019

While Straight Ahead to the U.K. is Segal-Garcia's second release for 2019, this music was actually captured a good seven years before the Dreamsville material was recorded. And the backstory stretches back even further, all the way to 1973. That's when Segal-Garcia first met saxophonist Andy MacIntosh, who she would go on to date for a spell when both ended up living in California in 1975. The couple eventually split, MacIntosh moved to England, and that was the end of that. But time and social media have a way of circling 'round to the past, so the end is never really the end. After the pair reconnected via Facebook in 2011, MacIntosh invited Segal-Garcia to cross the ocean and record with some of Britain's best. The vibe at the sessions was positive, but the vocalist was under the weather and the music, which called for some decoration, simply sat on the shelf.

MacIntosh passed away in 2013, leaving behind a legacy in music and memories, and Segal-Garcia never forgot about the recording. Once her close friend, Dan Davilla, heard about the album's existence, plans were put in motion to finally see it through. Segal-Garcia brought multi-hyphenate John Leftwich into the mix to help enhance, clean and dress the material, she recorded new vocals, and a number of additional musicians were brought in to add to the originals. The end results honor what Segal-Garcia and MacIntosh accomplished while updating it for the present moment and standards.

Essentially a straight-ahead session, the biggest surprises come through the mix of material, the seamless overlay of new additions onto the base tracks, and the way Segal-Garcia owns it all with strength of position. Not known for down-the-middle dates, she nevertheless proves incredibly compelling walking this walk. From the shuffling sizzle of Dave Frishberg's "Wheelers and Dealers" and the Brazilian-infused bounce and shimmer of Chick Corea's "Highwire" to the haunting balladry of Shelby Flint's "Something We May Never Know" and a markedly different, bossa-esque "Dreamsville" that connects the two albums under discussion, Segal-Garcia delivers with supreme class. Add to that the churchy good graces of Cannonball Adderley's "Sermonette," the understated cool of John Abercrombie's "Hippityville" (with the leader's lyrics and a guest appearance by Norma Winstone), a few originals and another chestnut or two and you have a real recipe for success. Segal-Garcia, MacIntosh, the U.K. crew that recorded with them back in 2011 and the L.A. studio regulars that came aboard in 2019 all mesh without issue.

While this singer isn't one to dwell on a project, preferring instead to seek out the next horizon, both of these dates deserve a moment. Working different seams and proving admirable for varied reasons, these albums serve as shining examples of imagination, voice and vision acting as one.

Tracks: Dreamsville; The Three Of Us; Canto Triste; Scarlatti; September In The Rain; Lonely Woman; Zingaro; You Are There; Pensativa; Beyond The Years; Sometime Ago/Children's Song.

Staight Ahead to the U.K.

Tracks: Wheelers And Dealers; Highwire; Hippityville; Sermonettte; I Get Along Without You Very Well; Shake It Down; Recipe Of Love; Song 4 Sandy; Something We May Never Know; Dreamsville; Gypsy In My Soul; Last Night When We Were Young; Hippityville (shortened version).