BY TROY DOSTERT
February 2, 2021
Sign in to view read count 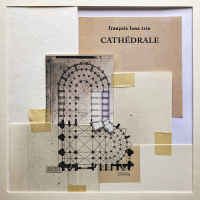 The title of Swiss-based pianist François Lana's latest release, Cathédrale, carries a two-fold significance. Its most obvious reference is to transcendence, something Lana affirms in the liner notes: "Music is a form of spirituality," but it can also be a reference to the sophisticated architectural approach Lana brings to his art. Not only the music, but the album's vivid artwork and the recording process itself were entirely in the hands of Lana and his colleagues, bassist Fabien Ianonne and drummer Phelan Burgoyne. In a quick-consumption era in which music, like all products, can often seem disposable and ephemeral, it is refreshing to see an artist take such obvious pride, and display such evident care in the presentation of his craft.

Starting with the decision to record directly to 8-track analog, the trio's sound has a palpable immediacy which is noticeable right from the opening moments of "Chaos Momentum," a freely improvised track which crackles with energy, as Lana's glancing shards and fleeting figures engage in close dialogue with the dexterous rhythmic fluctuations of Ianonne and Burgoyne. Even this cut, despite its undeniable freedom, carries with it a certain discipline; nothing is extraneous or an afterthought. And that is true of the other seven pieces as well; with most coming in at five minutes or less, the trio convey their ideas in each piece succinctly and eloquently before moving on to the next one.

Lana's compositions reveal the influence of forbears such as Thelonious Monk and Herbie Nichols, with Andrew Hill getting an explicit nod on "Hillness," a debonair stroll which even evokes a bit of Ran Blake in its dramatic opening chords before settling into a gently swinging groove with oblique harmonic development. Other pieces hew more closely to a bop vocabulary, like "Der Turm" and "Weird Stuff," but always with a sense of adventure and risk preventing anything from becoming too conventional. It is music that is rooted in the tradition, but always gesturing beyond it to something yet to be explored.

The most unusual tracks may be the last two, where Lana brings electronics into his pieces. He uses some subtle synth work in "Nocturne" to complement the piano in a more contemporary jazz vein, while on the closer, "Cathédrale," the music turns toward abstraction, relying on texture and the creation of a somewhat disquieting atmosphere before offering just a few melodic fragments toward the end of the track. Even if these pieces don't feel entirely consistent with the bulk of the album, they're further evidence of Lana's intentional, deliberate approach to his muse. He is a pianist to keep an eye on, and one hopes this trio will have further opportunities to explore his well-constructed handiwork.