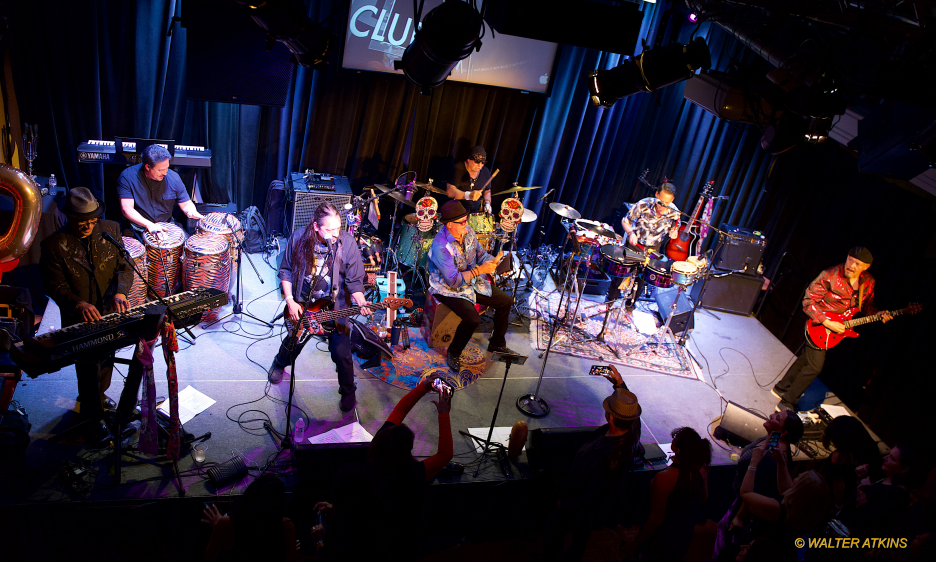 By Walter Atkins
October 19, 2022
Sign in to view read count

Carnaval! with surprise guest Tony Lindsay, along with Azul Latino, spearheaded a superb presentation of Latin rock, dancing and family commemorations at Redwood City's Club Fox. As the SF Bay Area prepares for the upcoming Day Of The Dead, this moment was best described as Night Of The Living Family Celebrations.

Redwood City 's Club Fox served up a Saturday fantastic night of music, dancing and observances. The Fox featured the searing Latin rock music of Carnaval, one of the popular Santana tribute bands in the San Francisco Bay Area along with local favorite Azul Latino (Blue Latino). The stage had a few festive skull decorations in anticipation of the massive Mexican holiday Día de los Muertos (Day Of The Dead). Besides its usual weekly mix of sonic delights, the club also hosted two birthday parties that evening, and one of them shared sandwiches and birthday cake with the regular patrons. It was a nice finishing touch to a pleasurable time at the San Francisco Peninsula spot.

Azul Latino ignited its session with "A Dios Le Pido" (I Pray To God). People slowly started making their way to the large dance floor as the rhythmic music filled the venue. The lively Mojica sang and patrolled the stage with an effervescent style that was engaging and fun for all. The band played with passion and zest. Rudy Ramirez, a professor at the nearby College of San Mateo (CSM) and also the home of San Francisco Bay Area FM station KCSM the Jazz 91, commented on the group. Azul Latino vocalist Mojica is originally from Columbia and one of his former students. He also discussed his involvement as one of the group co-founders, and the early days of the band's development and progression. He also liked how "they put together the Latin rock sound." Azul Latino closed out its set with "La Flaca" (The Skinny One).

Besides the other two families and friends observing birthdays at the Fox, it was also an immensely memorable night for a third family. According to Dr. Bernando Gonzalez with LRI, "This show was about the Nolasco Brothers. Friends and family were in abundance at this show to view the brothers in each band, as well as coming together with brother Robert to join Ernie and Vic on stage. The song with all the brothers was "La Flaca." Seeing the brothers playing made it a genuine family affair.

"Carnaval" launched the band and it was followed by "Let The Children Play." Deep into its stanza, Carnaval! erupted into "Dance Sister Dance" which had all available spaces overflowing with dancers and movement. The rhythm section reigned supreme by keeping the beat solid and cohesive for lead singer Elizalde. The floor had a life of its own as folks swayed and moved to the familiar polyrhythms of the evening. Towards the end, Carnaval! performed Peter Green's (Fleetwood Mac) "Black Magic Woman" which flowed into Gabor Szabo's "Gypsy Queen." This timeless track was the centerpiece of Santana's chart topping Abraxas album (Columbia 1970).As a surprise present to the birthday revelers, eleven-time Grammy-winning vocalist Tony Lindsay (Santana) sat in with Carnaval! With a packed floor and balcony, they closed out the exuberant evening with the Timmy Thomas hit "Why Can't We Live Together" and another Santana gem "Open Invitation."

Carnaval! with surprise guest Tony Lindsay, along with Azul Latino, spearheaded a superb presentation of Latin rock, dancing and family commemorations at Redwood City's Club Fox. As the San Francisco Bay Area prepares for the Day Of The Dead, this moment was best described as Night of The Living Family Celebrations.