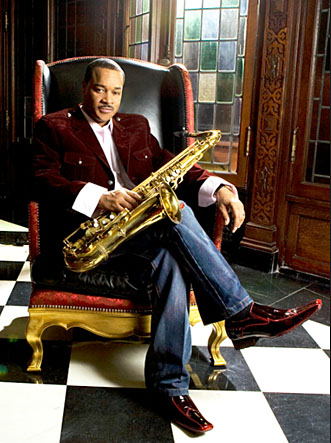 So what do you do if you're a smooth jazz recording artist like saxophonist Carlos Cannon, and one of your songs is quickly becoming the next big hit on the line dance club scene? "Get ready for YouTube and the line dance party," says Chicago-based line dance instructor Belynda Head.

"Line dancers are always looking to learn new dances, especially if it's a likable song." And that song, says Head, is "To The Left, To The Right" from Cannon's Steppin' Up To The Game (Cannon, 2010). Cannon wrote this catchy tune with the perfect blend of a soulful jazz melody, peppered with R&B vocals and a danceable rhythm. What the saxophonist created is a hit song that has the right ingredients for party-goers on the dance floor.

"It also has the right mixture of lyrics," says Belynda. "If the song has reference to dance movements, line dance instructors can use those lyrics to choreograph a dance routine."

Cannon says his intention was to write a song for line dancing, and that's he's pleased it caught the interest of line dance enthusiasts. "I will say my style of music is urban, R&B and dance music. I am giving the new and old school generation what they want in good music: dance music, stress relieving music and some good grooving music."

When Head first heard Cannon's "To The Left, To The Right," she was sure it would be a song that line dancers would love. "What makes a line dance song so attractive is that you're giving the song a life of its own on the dance floor. It's really cool because you know the dance was designed for that song, so it moves with the flow of the music."

"To The Left, To The Right" resonates, with the saxophone carrying the flow of the melody for an upbeat dance tune that's also easy to listen to on the radio. Like other signature songs from R&B saxophonists of the past: Ronnie Laws' "Always There," from Pressure Sensitive (Blue Note, 1975) and Grover Washington Jr.'s title track to Mister Magic (Kudu, 1974), Cannon's "To The Left, To The Right" is groundbreaking for the new, urban jazz sound.

Head appreciates Cannon's attention to the line dance club scene and wants to emphasize the variety of other promotional opportunities in today's new media. "I will definitely use 'To The Left, To The Right' line dance video as a feature on my upcoming television show, Line Dance Party! Carlos' music has the right touch to become a big success on YouTube and at the record stores."