The younger brother of Hubert Laws, Ronnie Laws has a nice soulful sound on tenor, but has never seriously pursued playing jazz. Throughout his career, which includes early-'70s gigs with Quincy Jones, his brother, Ramsey Lewis, and Earth, Wind & Fire, Laws has essentially been an R&B player. He has led his own albums since 1975, but recorded very little of interest to the jazz world, although he is often listed on Billboard's contemporary jazz chart.

In 1970 he moved to Los Angeles, where he found work under the tutelage of such legendary talents as The Jazz Crusaders and Hugh Masakela. His formative training also included stints with Jazz pianist Walter Bishop Jr. and organist Doug Cann. He was a member of the 70’s much-revered soul group Earth Wind and Fire, where he played tenor and soprano sax for a two-year stint, before finally venturing out to pursue a solo career.

Assisted by immortal Jazz great Donald Byrd, he soon signed his first recording contract with Blue Note records, resulting in the impressive debut album Pressure Sensitive (1975), produced by family friend, Wayne Henderson, (a founding member of the contemporary jazz pioneers The Crusaders), which rapidly emerged to become the longest selling album, at that time, in the 42 year history of the label. Pressure Sensitive, was followed up by his second album Fever (1976).

Controversy quickly erupted around him, with so called Jazz “purist”, criticizing Laws’ inventive, non- traditional, “Jazz Fusion” style. Laws promptly answered his critics by also scoring unprecedented cross-over success in R&B and Pop, in addition to Jazz, and receiving multiple awards for originality in the process.

Laws is a proven natural at combining the exploratory heart of Jazz with the broader reaching strains of Soul and Pop music. His first hit, “Always There” (credited as Ronnie Laws and Pressure on the original 45), was one of the most popular, sax-driven, cross-over hits of the 70’s Jazz-Funk Fusion era. He ushered in the sensualization of the soprano sax with Quiet Storm gems such as “Grace”, “Karmen”, and “Just Love”. Pressure Sensitive, Fever, and Friends and Strangers (Blue Note 1978), the title track of his third album, all propelled to gold status. Show less

Ronnie Laws, the Cunninghams Coming to the Sheldon This Summer

Harvest For The World 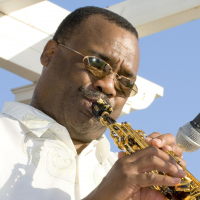 All About Jazz musician pages are maintained by musicians, publicists and trusted members like you. Interested? Tell us why you would like to improve the Ronnie Laws musician page.