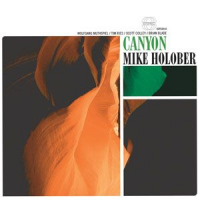 Holober is a lyrical pianist coming from the Evans/Jarrett/Jamal tradition, but while his playing on Canyon is strong and confident, his compositions are the real highlight of the release. The seven originals run the gamut from the extroverted swing of “Same Time, Same Place” to the pensive, inward-looking “Roc and a Soft Place.” Holober writes memorably melodies that stay in the mind long after the disk is over.

Joining Holober on Canyon are the ubiquitous Scott Colley on bass and Brian Blade on drums. Choosing a rhythm section with proven efficiency was a wise choice; Colley and Blade play almost telepathically, providing empathic support for all soloists.

Guitarist Wolfgang Muthspiel is a somewhat lesser-known contemporary of Kurt Rosenwinkel, and he shares an oblique, post-Metheny/Scofield/Abercrombie approach to the electric guitar. Recipient of the 2003 European Jazz Award, he is a remarkably consistent and inventive player who brings tunes like “Spin” to life with a warm, slightly-overdriven sound that is timeless, yet completely contemporary.

The label on the cover of the release touts saxophonist Tim Ries as playing with the Rolling Stones, but that is hardly an indication of what he proves himself capable of doing on this disk. There is a certain fragility to his sound in the upper register that brings to mind British reedman John Surman; but Ries’ roots are firmly planted in the American jazz tradition. He can play it tender, as on the poignant ballad “In So Many Words,” or fleet-of-finger, as in the re-worked standard “You and the Night and the Music.”

With a program that emphasizes strong compositional ability, tasteful playing and capable leadership skills, Canyon is an auspicious début from a pianist who will, no doubt, be heard from more in the future.

Visit Sons of Sound on the web at www.sonsofsound.com .

Canyon, Ansel's Easel, Heart of the Matter, Same Time, Same Place, Roc and a Soft Place, Spin, In So Many Words, You and the Night and the Music, Stardust