By Troy Collins
November 18, 2016
Sign in to view read count 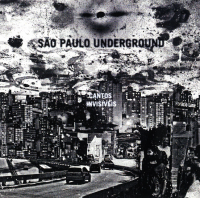 Democratically led by Chicago-based sound explorer Rob Mazurek, São Paulo Underground has been defying genre conventions and musical boundaries for almost a decade. Originally formed with percussionist Mauricio Takara and keyboardist Guilherme Granado during Mazurek's sojourn in Brazil (2000-2005), the ensemble's membership has undergone a subtle change on its fifth album with the addition of Swiss-born multi-instrumentalist Thomas Rohrer, a frequent collaborator of Mazurek's.

Translated from Portuguese as "invisible songs," Mazurek says of Cantos Invisíveis, "the way we make our music, always masking it in some kind of way, a disappearing through layering and sound manipulation ... we create atmospheres that cause form and melody to disappear, and to reappear." Although myriad styles materialize repeatedly throughout the album, the overall effort feels cohesive and suite-like in execution, unified by a raw, music vérité aesthetic.

The episodic opener, "Estrada Para o Oeste," is indicative, as it vacillates between numerous genres, from hypnotic amplified dirges and phantasmagoric post-bop excursions to a Carnival-esque celebration of clattering percussion and harmonized chanting. Shorter tunes subsequently unveil a variety of moods: "Violent Orchid Parade" evokes a riotous street party; "Lost Corners Boogie" grooves on glitchy motorik funk; and the ebullient "Olhaluai" regales as one of the album's catchiest songs, while "Of Golden Summer" is the most unabashedly lyrical.

The session concludes with "Falling Down From the Sky Like Some Damned Ghost," which keenly encapsulates the band's manifold strengths: Mazurek's soulfully abstract, efx-laden cornet; polyrhythmic thickets of percussion; psychedelic swirls of Moog, Mellotron and assorted synths; even plangent vocals can be heard below dense layers of electro-acoustic interplay. At just over a quarter of an hour, the set's most expansive inclusion closes the date with the same visionary sensibility that has defined the band's oeuvre for the past ten years.