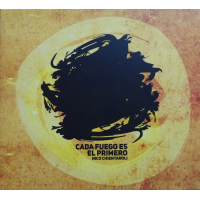 Argentinian pianist (by way of Amsterdam) Nicolás Chientaroli delivers a solo performance that demonstrates the piano's architectural sound beyond the usual demarcation points of its 88 keys. Cada Fuego Es El Primero opens with plucked strings, then a massage of the prepared insides of the instrument. "Fuego Hipnótico" reminds listeners the corpus of the piano is made up of wood, a soundboard, metal strings and is, in fact, a percussion instrument. Chientaroli demonstrates this with tappings, piano hammer blows and manipulation of his instrument's bowels. Just as drummer Han Bennink can perform a drum solo sans drums, Chientaroli conveys a piano performance without a keyboard.

Like fellow adventurer Agusti Fernandez, once he is seated on a stool, at the keyboard, his touch is somehow magnified by way of his extracurricular activities. "Orígenes" and "Fuego Nativo" deliver a rousing journey through varied sentiments. Chientaroli draws out the melancholy, or makes the piece into child's play. "Fuego Nativo" opens with the artist playing both flute and piano before turning heavy-hearted and ultimately (and fittingly) unresolved.

"Historias De Otras Dimensiones" is an exorcism of strings, his prepared piano becomes a noise generator not unlike that of Masami Akita, aka Merzbow. Where Merzbow uses electronics, Chientaroli wrestles sound from his acoustic environment. His explorations seem to have no limitations. The hypnotic piece "Fuego En El Espacio" which ends the disc opens with the echo of notes struck, before the piano's insides morph into first the sound of a steel guitar, then bells ringing in a square. What a magnificent and extraordinary journey of sound.