By Stuart Broomer
December 4, 2009
Sign in to view read count 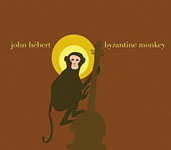 John Hébert's Byzantine Monkey begins with a loop of the traditional "La Reine de la Salle" sung by Odile Falcon in an ancient reedy voice, Hébert's improvised bass joining in, his lines at once swift and empathetic, lyrical and microtonal, his sound deeply resonant and every metallic buzz of string and finger captured. It's an arresting moment, Hébert's Louisiana roots as palpable as his bass. Those roots are just as apparent when loop and bass cede the foreground to Tony Malaby's tenor and Michael Attias' alto, the two saxophonists playing the Cajun melody with enough grit and wail to suggest Albert Ayler and Charles Tyler playing on the Bayou. The performance sets a pattern of dense overlay and profound reflection that distinguishes Hébert's work here.

He's a musician whose bass is confident in the foreground and whose compositions consistently merge strong musical ideas with forceful emotions. Like Charles Mingus, Hébert enjoys developing turbulence at slow tempos as well as fast and there's real intensity in a performance like "Blind Pig" that comes from the sheer accumulation of voices, Attias' keening alto and the leader's bass complemented by the rattling drums and percussion of Nasheet Waits and Satoshi Takeishi. Malaby's multiphonic roar initially gives a dirge-like sound to "Ciao Monkey" and there's often a gravity here that comes from the sheer power of low frequencies, Attias sometimes doubling on baritone and Adam Kolker, present on half of the ten tracks, adding bass clarinet to his flutes.

Hébert has recorded a couple of these tunes before (in duo with pianist Russ Lossing on 2008's Line Up, on hatOLOGY), but "Blind Pig and "For A.H.," a tribute to the late Andrew Hill, take on a new power here while retaining much of their intimacy. While he has already distinguished himself as a bassist, this is a striking debut as a bandleader for Hébert, the group's sound, empathy and collective identity all testifying to his focused originality.