By Glenn Astarita
August 29, 2020
Sign in to view read count 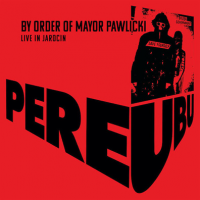 Launched in Cleveland, Ohio in 1975, the group's in-depth history includes shifting personnel changes, although charismatic front man/vocalist Dave Thomas has remained at the helm since the beginning. A notable live act as they get from A to Z in expeditious and often boisterous fashion, this two- CD set compiles 2017 performances in Jarocin, Poland and other tracks spanning 2013 -2018 in Croatia, France, and Germany.

The ensemble has coined its stylistic tendencies as avant-garage music, but at various intersections they generate slamming straight-four rock grooves and motifs that may summon memories of Captain Beefheart's Magic Band along with psych, prog and witty dramatic sequences kicked off by Thomas' hipster speak and frisky discourses. No doubt, they enjoy lively interactions with the audience.

Powerhouse bassist Michele Temple prominently steers the pulse on many tracks amid Robert Wheeler's flickering synths and guitarist Gary Siperko's lucid slide voicings and bristling single note licks intertwined with some good-natured mayhem during certain parts. However, Thomas kicks off "Real World" by stating the "real world is funky, it smells," leading to offbeat digressions, coupled with a catchy theme. Yet "My Dark Ages" is designed with the bassist's ostinato grooves and more of Siperko's fireworks, partially reminiscent of original Pink Floyd guitarist Syd Barrett's adventurist, experimental slide guitar configurations, all led by Thomas' wily singing about a 'solitary individual.'

The band's live shows contain the excitement of a 70s proto- punk unit. But Ubu is largely more complex, although the balls-to-the wall excitement factor looms radiantly on these largely brief and concise works. As Wheeler uses a theremin to insert an eerie background into "Vulgar Boatman Bird," where Thomas' whimsical choruses ride above a thrashing rocker, amped by the Temple's upfront attack and other factors complete with bawdy overtones. Moreover, "Visions of the Moon" is culled from the artists 2013 presentation in Zagreb, Croatia and features Darryl Boon's clarinet lines, along with the front line's subliminal musings and EFX maneuvers that morph into a free-form-like episodes. Thomas often spins matters into a gas of a party. But there's little doubt that the musicians mean business and pull quite a few tricks out of the bag on a continual basis, highlighting the outfit's signature brand, relating to its long run within rock music's outer limits.