BY WOODROW WILKINS
August 12, 2009
Sign in to view read count 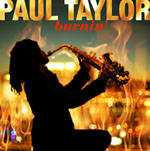 It's refreshing when a contemporary artists steps outside the box and revisits an old style of music. Even more so when it's not simply a collection of covers. Paul Taylor scores with Burnin'.

A native of Denver and a musical product of the University of Nevada-Las Vegas, Taylor began developing his saxophone skills at age seven, growing into a garage band that played funk, Top 40 and fusion. As a professional, he's carved a niche as a solo artist, as well as work with The Rippingtons and all-star "Groovin' for Grover" lineup. For Burnin', Taylor is joined by two producers, Rex Rideout and Barry Eastmond, who each playing keyboards on selected tracks.

"Back in the Day" captures the essence of that lively, soulful sound common in the 1960s and '70s, when saxophone-led instrumentals weren't necessarily called jazz. The same could be said for the entire album, as Taylor compares this work to the sound of Junior Walker & The All-Stars. Darrell Crooks' rhythm guitar, Melvin Lee Davis' bass and Michael White's drums contribute to that feel (Ronnie Garrett assumes bass duties on three tracks). Billy Cliff lends his voice to the chorus, but it's Taylor's tenor that leads the song.

"Groove Shack" is as its name implies. Melodie Eastmond and Barry Eastmond Jr. join the crew with hand claps and as the vocal "party crew." Taylor puts the tenor through some grinds at key moments—a throaty growl employed by many tenor players over the years, from Boots Randolph to Kirk Whalum to Jay Beckenstein. The band is festive throughout.

"Side Pocket" may be the coolest song in the set. Garrett holds down the bass line, and Gary Meek joins the ensemble on flute. Taylor has the melody, but it's that cool beat that gets toes to tapping and heads to bobbing. Rideout mixes in a little acoustic piano sound with his electronic keyboard play.

Taylor does play the alto on two songs, but the tenor is the dominant sax here—a twist of fate, as the soprano he had intended to play in session was damaged during flight. The switch works. It's hard to imagine these songs being as vibrant on anything but a tenor. It wouldn't be fair to say that Burnin' is Taylor's best ever. Ladies' Choice (Peak, 2007) was pretty darn good. But it's close.

Back in the Day; Revival; Groove Shack; Remember the Love; Burnin