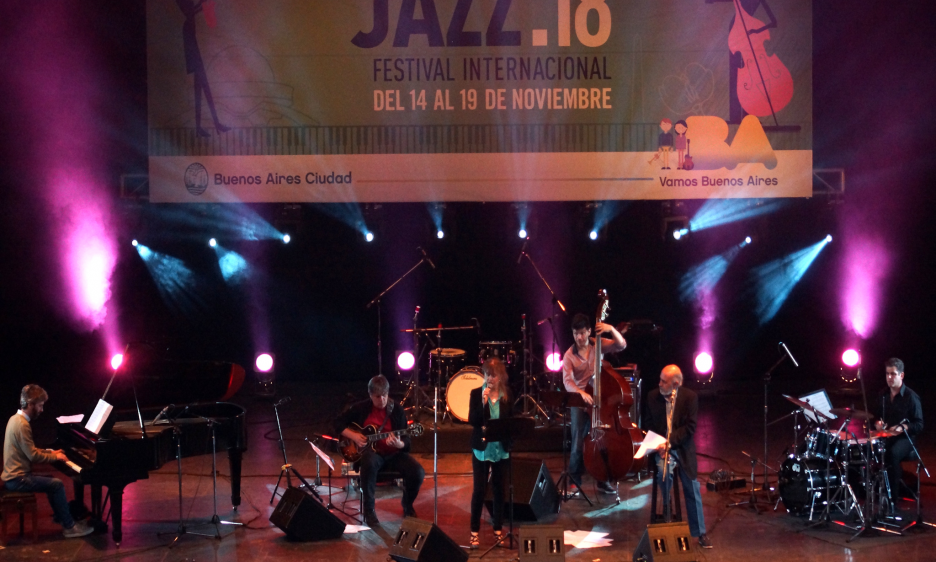 By Mark Holston
February 8, 2019
Sign in to view read count

Despite a backdrop of social discord and economic woes, the festival, largely funded by the municipal government, forged ahead undeterred and with remarkable success.

Over the course of its 11-year history, the annual Buenos Aires International Jazz Festival has taken Monk's "Straight, No Chaser" creed to heart. When it comes to programming, few festivals in the world can match the Argentine event for its choice of headlining musicians who, while in most cases are not household names, are widely recognized for their distinctive artistry and improvisational skills. Consider that a major so-called "jazz" festival in the U.S. recently announced that the Rolling Stones would headline its yearly series of concerts and that many festivals take pains to book well known crossover attractions. In Buenos Aires, meanwhile, the star attractions were British vocalist Norma Winstone, Italian saxophonist Stefano di Battista, baritone saxophonist Gary Smulyan, pianist David Kikoski and Israeli woodwind artist Anat Cohen. Although Buenos Aires failed to make a popular magazine's recent list of 25 destinations it dubbed "The World's Best Jazz Cities," the level of sophistication of jazz aficionados in this metropolis of 15-million souls and the presence of festivals and jazz venues clearly make the city an equal to many of the globe's most noted jazz destinations.

The festival has managed to survive despite political and economic turmoil and social unrest. In the past year alone, the Argentine Peso has lost half of its value. On any given day, major boulevards in the capital city are jam-packed with thousands of demonstrators protesting everything from government corruption to loss of purchasing power and abortion rights. Despite this backdrop of social discord and economic woes, the festival, largely funded by the municipal government, forges ahead undeterred and with remarkable success.

This correspondent spent most of his time enjoying the welcoming atmosphere at the festival's largest outdoor venue, Parque Centenario in the middle class Caballito neighborhood—a Central Park-type space featuring fountains, an expansive lagoon, diversions for kids, and an amphitheater with seating for several thousand. From my more centrally-located hotel in San Telmo, many miles away, a connection on the "B" (red) subway (subte) line makes arriving at the park a breeze—a fraction of the time as taking a taxi and for the equivalent of .50 U.S. cents or so. Disembarking at the Ángel Gallardo station, one need but walk a few blocks to enter the park. Along the way, take note of the Rio Café Bar, a splendid example of a late 1800s era neighborhood pub.

Parque Centenario concerts are run like clockwork, with 45 minutes of music, followed by a short break and an on-time downbeat for the following group. The scene is so relaxed and inviting that one of the park's large colony of house cats showed up one afternoon to perch on the sunny side of the stage and groom himself, seemingly oblivious to the cacophony of cymbal crashes and booming bass lines emanating from the nearby band. The audience is equally supportive an any genre of music presented, taking collective pride in the artistry of Argentina's best up-and-coming musicians. Many sip yerba mate, the herbal tea that is an obsession in the southernmost part of South America. A group of swing dance addicts is always present, waiting for the right beat to show off their ballroom techniques,

Bassist Maxi Kirszner's trio offered an example of the state of avant-garde jazz in Argentina, with a bracing combination of spaciousness in the arrangements contrasted with the occasional injection of dense rhythms and melodic fragments of the leader's abstract compositions.

Vocalist Livia Barbosa, one of Argentina's most seasoned jazz singers, and a quartet led by guitarist Fili Savloff performed at the park under the banner of the festival's Jazzología program. The series is designed to showcase local groups that represent the diversity of jazz styles, from trad music of the 1920s to Latin jazz fusion of today. This set was a well-crafted, bossa-oriented tribute to the late French composer and pianist, Michel Legrand and included such hits as "The Windmills of Your Mind" and "What Are You Doing the Rest of Your Life?"

Javier Malosetti, a vocalist, bassist and guitarist, led the La Colonia quartet through a bracing set of funk-fired blues and jazz fusion that proved to be an audience favorite, while trumpeter Sebastián Greschuk's quartet offered a taste of classic, mainstream jazz, echoing the likely influences of such trumpet greats as Woody Shaw and Eddie Henderson.

The Explossion Latin Jazz Ensemble offered the perspective of a stylistic outlier. Afro-Caribbean-style Latin jazz has limited appeal in Argentina, but this historic group drew and enthusiastic audience response thanks to its rhythmic vitality and nod to pop music via an engaging English language version of Stevie Wonder's "All In Love is Fair." The group was born 35-years ago, and its original members included such hallowed artists as Uruguayan percussionist Rubén Rada, a member of the 1970s celebrated fusion trio Opa, and Argentine trumpet legend Fats Fernández. In its present incarnation, which includes the regarded pianist Manuel Fraga, the unite pumped out intricate, Irakere-style arrangements of such standards as "Manteca."

A new feature of this year's festival was the use for an outdoor concert stage in a plaza adjacent to the event's major venue, the Usina del Arte in the colorful port district of La Boca.

One of the festival's most joyously-received performance was in the art center's auditorium on the closing evening. The Grammy-nominated group comprised of clarinetist Anat Cohen and the Trio Brasileiro simply stunned the SRO audience with their virtuosic readings of Brazil's storied choro style. Guitarists Douglas Lora and Dudu Maia and percussionist Alexandre Lora provided the perfect rhythmic complement to Cohen's soaring clarinet outings. It all added up to the perfect pairing of extraordinary musicianship and heartfelt camaraderie among the artists and with the ecstatic audience.

The festival's closing moments provided a peek into Argentina's jazz future via the talents of the young instrumentalists of the Manuel de Falla Conservatory big band. The dapper musicians were led through a program of standards by bari saxophonist Gary Smulyan and demonstrated their soloist skills. Smulyan's hand-picked charts included some obscure arrangements from recent decades that included "On Green Dolphin Street," "Lady Bird," and "Smoke Gets in Your Eyes." The student musicians, who had worked with the saxophonist throughout the week, were more than capable of reading down the technically-challenging arrangements. Thus, the festival ended with hugs and a plethora of the right notes.