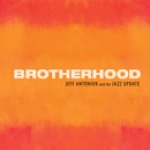 A master teacher at the Washington Performing Arts Society and the Capitol Jazz Project, saxophonist Jeff Antoniuk has led jazz camps and performed at several festivals. His quartet Jazz Update, featuring Tom Baldwin on bass, Wade Beach on piano and rhodes, and Tony Martucci on drums and assorted percussion, has released its second album, entitled Brotherhood.

"Screwball," the opening track, is a toast to Antoniuk's son, Aidan, who somehow earned that as a nickname. The music has the mood of a child at play with Antoniuk's tenor sound rich and smooth. The group's syncopation is solid and Baldwin and Martucci are in lockstep rhythm. It's easy to imagine a little boy's room, where four friends are playing together but at the same time, each doing his own thing.

"Meet Me at the Ponderosa" is a bouncy tune that's dedicated to Antoniuk's father. After the driving opening sequence, the song shifts to a New Orleans-style stroll. From there, things get quirky, as Beach plays both the piano and the Rhodes. At times, the blend sounds like a whistle being blown in the face of a fan.

Antoniuk shifts to the soprano for "Global Village." In 12/8 time, it's a celebration of the popularity of West African music being incorporated into jazz. The leads are excellent, between Antoniuk and Beach, but Martucci's versatility on drums and percussion highlights this piece. Shortly after the three-minute mark, Martucci goes it alone with overdubs on the kit, hand drums and other instruments.

Brotherhood features five Antoniuk originals, two songs penned by Baldwin and fresh interpretations of three jazz standards. The music is diverse in its energy and mood. The quartet is cohesive, playing well as a unit with solid individual performances.

Screwball; Brotherhood; Meet Me at the Ponderosa; Isfahan; Global Village; Walts With the Wind; Mister No Bones; All of You; Hot House / Evidence; Slickery.