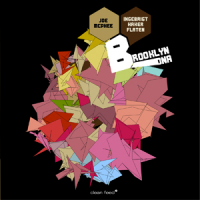 Veteran multi-reedman, trumpeter and consummate improviser Joe McPhee—along with Norwegian bassist Ingebrigt Håker Flaten—serenades Brooklyn, NY, with allusions to tenor sax titan Sonny Rollins' historic practice sessions under the Brooklyn Bridge and other inferences from the days of yore, on Brooklyn DNA. In recent years, the borough has enjoyed a bit of momentum with its chic restaurants and music venues, while serving as the residential area of choice for many artists. This duo's intimacy and like-minded communion of musical spirits offer an upbeat and rather complex chain of musical events articulated with lyrically rich song forms and journeys into the freer realm.

The duo's semi-structured approach draws upon abstracts but is not dominated by an avant-garde perspective. Nonetheless, McPhee is a dazzling, multifaceted improviser who joggles the psyche. In this program, the two communicate a loose game plan assembled with tangible harmonic applications and wily improvisational jaunts. Therefore, "Putnam Central" (named for a Brooklyn social club attended by Charlie Parker and others) is a piece that toggles between earnestness and mutable dynamics.

McPhee's breathy, rhythmic, and darting pocket trumpet notes ride above Flaten's nimbly executed countermeasures, where a semblance of camaraderie is occasionally dissected with moments of angst. Paralleling a social club, the duo executes a surfeit of dips, spikes and mutant themes. Perhaps mimicking the noise of a congenial get-together, the musicians mingle an abundance of emotive aspects without veering off into a cosmic void. Here, art prolifically mimics life.