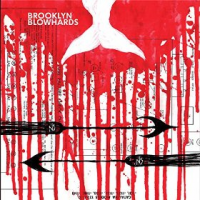 Imagine seeing a despondent Albert Ayler walking around Brooklyn on a cold November day in 1970, with his tenor saxophone under his arm. Some say he threw himself into the East River, a suicide by drowning. His loss, our loss, was one a true original voices in jazz.

Now picture Ayler with a copy of Moby-Dick; or, The Whale tucked under his arm. Reading the 800-plus pages of Herman Melville's opus has been attempted by many, but completed by a few (probably more than Joyce's Ulysses, but less than Pirsig's Zen & the Art of Motorcycle Maintenance). Ayler would have endured, reading and incorporating the whaling novel into his ethos. Well, at least that is what the sea shanty cover band Brooklyn Blowhards are telling us.

Saxophonist Jeff Lederer is perhaps the foremost expert and interpreter of Ayler's music performing today. He incorporates a little Ayler into every project he works on, from his Shakers N' Bakers, a reimagining of Shaker religious hymns, his stellar quartet recording Sunwatcher (Jazzheads, 2011), and his work with his wife Mary LaRose. He can also be heard as a member of the trad/jazz combo Swing n' Dix, and in drummer Matt Wilson's quartet.

But what of Ayler and sea shanties? Actually, the combination is quite congruent. Ayler's marching themes and love of anthems were all the constructs of work songs, just as these shanties. The disc opens with the classic Ayler composition "Bells." A parade of drums escorts the Blowhards into the hyperspace squeals and shrieks of the brass chase. But there is also Art Bailey's accordion on board, adding to the maritime theme. Ayler covers only comprise five of the fourteen tracks, but as with Albert's music, traditional songs—folk music—was a big part of his repertory. "Shenandoah" spreads out under the mellifluous voice of LaRose, Lederer's Mary Maria Parks and Gary Lucas' guitar. She speaks/sings "Island Harvest" Ayler's island carnival song with dancing horns of Brian Drye's trombone, Kirk Knuffke's slide trumpet, Lederer and Allison Miller and Stephen Larosa.

The joy is how a cover of "Omega" yields itself to a shanty, and "Shanty Anno" or "Black Ball Line" could easily be mistaken for Ayler originals. Cheers to the Brooklyn Blowhards, and Lederer, who needs more "Arrr's" in his name.