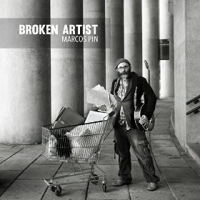 Santiago de Compostela, Spain, is famous for the religious pilgrimage, but in the jazz world it is gaining a reputation as a breeding ground for premier musicians. A host of piano players make the area home, so guitarist Marcos Pin easily stands out in the crowd. The hard bop influenced Broken Artist is his tenth release as leader, representing a focused trajectory and commitment to craft.

This project is based around six compositions which depict a day in the life of a musician as he carves out an existence. The enthralling liner notes, actually a short story by Félix Amador, serve as a guide, and lay out the scenario of an anxious performer in Santiago, a city with hard edges, no longer so blessed. Running on "Blind Hope," offers plenty of room for saxophonist Pablo Castanho, who appears to challenge the premise that all is lost, as he lunges straight ahead into the smoke and flames. Melancholia wraps around the ballad "Lullaby For My Two Boys," as our hero experiences the bittersweet emotions that take over when the applause is gone, the money's short, as he slips into his children's room, wondering about the future.

"I Love You Too," is a line used to often to cover the tracks of unfulfilled promises, in light of unremitting love. This song is an ensemble workout, Pin displaying clever arranging, as they kick it into the fast lane. There is a blue shade to "Castanho's Reed," specifically written for the sax man who spends more on his horn than he ever hope to make. Pin has an affinity for complex pieces, and "Carmen's Call," by Malcolm Stilton, is a study in tempo accents and chord crescendos. The distant constellation "Vulpecula," is the inspiration for this song, a tranquil observation taken from a lonely bridge on a dark night. In a world full of obstacles and challenges, sometimes the simplest acts of awareness can bring inner peace.

The concept Pin adhered to is the struggling artist, which may sound mundane, but is still relevant today, as people continue to follow their bliss. From his point of view, as a jazz guitarist at the end of the Iberian Peninsula, it might seem like a long arduous endeavor, but that is why he does it. If it was easy, anyone could do it. Jazz was born out of necessity of expression, and continues to be a source of encouragement around the world. The road to Santiago de Compostela is paved with hope, and the journey is for the faithful. Marcos Pin is on his own path, far from defeated, he is just getting started.

Blind Hope; Lullaby For My Two Boys; I Love You Too; Castanho’s Reed; Carmen’s Call; Vulpecula.