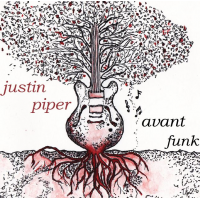 Avant Funk, Justin Piper's debut album, completes the creative circle for this remarkable musician in a number of ways. First of all, it documents his ability to create unique sounds and textures, Piper is the heart of the project, performing on guitar, bass, Rhodes and programing, in addition to writing all the compositions, making Avant Funk truly a personal portrait of his musical mind set. Secondly, it documents his abilities in shifting easily between styles, roles and instruments, while always conveying each musical idea with clarity and conviction. Completing the circle is Piper's ability to be a teller and visionary, he bridges genres and generations in a conversational manner that gives the listener a feeling of experiencing a musical story.

The exuberance of the album is centered in the contagious rhythms of funk, rock and fusion that come to the forefront on tracks like: "Buzz Book," "Rolling Blue Hill," "Yo Yo Pop," "Look At The Tars," and "Tonic Immobility." With Piper's solid rhythm guitar parts and dexterous lead riffing, funky bass lines, and compositional hooks, all rooted in the groove foundation of Tom Garrington's drum kit. It's impossible not to move! Piper really displays his soloing capabilities on "Buzz Book." His warm distorted lines build over the steady ostinato of the rhythm section. "Tonic Immobility," displays Piper's excellent lead lines with the added expression of a wha-wha effect, done with taste and complete musicality.

Avant is defined as, original or innovative; (especially with reference to popular music). Through it all, Piper reminds us that music is about emotions through a rhythmic journey in time and the sterling guitarist provides twelve track that will take the listener places. His playing is a delight, whether pouring out his passion on a ballad like "When I'm Alone" or wailing from the core a-la-Scott Henderson on "Big Rock." Avant Funk is an expedition— Piper's brilliant command of multiple instruments and compositions framed by Garrington's time keeping, and for any listener, whether their palates run from jazz-rock, funk, fusion or indie rock, this is a winner!

I Fall Down ; Buzz Book; When I’m Alone; Rolling Blue Hill; Big Rock; Two Whee’s; Somnambulist; What’s This?; Yo Yo Pop; Could I Have A Redo; Look At The Tars; Tonic Immobility.