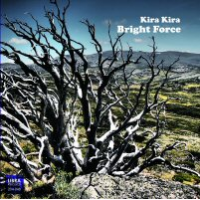 Expect the unexpected as the band navigates through skull-battering jazz-rock grooves, alternating currents and some fervent breakouts by the two pianists. It's an acoustic-electric program, due to Spence's use of the Fender Rhodes electric piano, EFX and piano preparations. At times the group inject swarming clusters into the background to provide an expansive and cyclical backdrop amid the artists's bountiful soloing spots.

On "Nat 4" you'll be treated to crashing cadenzas, crunchy electric piano voicings and heightening tension amplified by the trumpeter's enraged flurries. And during the three-part "Luna Lionfish" suite, the soloists modulate ethereal and creaky passages through terse call and response mechanisms and Spence's stringy prepared-piano parts. They also execute geometric unison choruses, including Tamura's breathy and creaky lines as the band elevates the intensity level with EFX treatments along with some rough and tumble improvised passages. However, Fuji's sweeping and linear block chords kindle a horde of probing contrasts. The ensemble's feverish modus operandi is often channeled through complex time signatures and loose groove detours, where storylines become fractured, deconstructed and reimagined.