By Jakob Baekgaard
November 5, 2014
Sign in to view read count 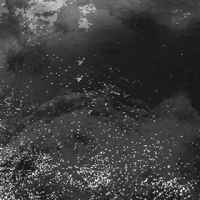 The beautiful cover of Danish saxophonist Lars Greve's album Breidablik has a secret that only reveals itself when looking closely at the surface. The name of the artist is hidden in the corner, printed with almost invisible letters, while all attention is directed towards an abstract sublime image. Is it nature or not?

The same question could be asked about the music. Greve disappears into a world of sound and together with producer Aske Zidore he has created an aural narrative that is filled with cosmic wonder and exploration of texture. The album is a fascinating journey that questions the concept of sound itself. Usually, we make a clear distinction between the sounds of music and the sounds of nature, but the point is that this distinction starts to blur in Greve's changing soundscapes where the sound of a seagull and a saxophone can become almost alike and the wind and the horn become one.

Of course, there are also many moments of pure music. The opening of "Part 1" is a stunning fugue of spiraling reeds broken by the sound of a bell and then comes the whisper of the horn. It is not a melody, but more like a prolonged tone that becomes so monotonous that the sound breaks into different patterns and reveal subtle shades. Electronic soundscapes intertwine with field recordings and silence. Things are happening all the time and yet there is a meditative beauty about it all.

The result is an album that resides somewhere between field recording, modern composition and free music. A kindred spirit could be Norwegian trumpeter Arve Henriksen, especially in his more experimental works. Like Henriksen, Greve is interested in the poetry of sound and the relation between memory, sound and nature.

Greve has captured the wonder of sound on Breidablik. There is no estrangement or pseudo-intellectual experiments. Instead, he instantly gets to the heart of the matter, both in terms of artistic vision and length. It is a short album, only 35 minutes long, but it is a work that reveals a world in itself and it is place that it is worth visiting.