BY BRUCE LINDSAY
September 14, 2010
Sign in to view read count 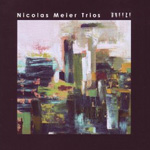 Breeze is a guitar trio album. To be more precise, it's a Trios album—a combination of original tunes and standards being performed by acoustic and electric bands. The result is an imaginative and creative recording that further establishes Nicolas Meier's reputation as one of the finest guitarists on the contemporary jazz scene.

Most of Breeze is performed by Meier's acoustic trio, with Demi Garcia on percussion and Paolo Minervini on acoustic bass. The electric trio—bassist/harmonicist Pat Bettison and drummer Asaf Sirkis, who both appeared on Meier's Journey (MGP Records, 2009)—adds an extra four tunes, including versions of Chick Corea's "Spain" and John Coltrane's "Countdown."

The electric trio's tracks find Meier playing fast and intense runs on his electric guitar, a nod to his other life with metal band Seven7, while Sirkis hammers out some driving and exciting rhythms, most notably on "Countdown." Meier's best performance on these four tunes comes on his own "Triart," his guitar playing at its funkiest and most inventive. On the other tunes Meier's ability is not in doubt, but his style is more generic, and lacks the distinctiveness demonstrated on "Triart" and on the acoustic numbers.

Bettison's electric bass playing is superb, his melodic solo on "Triart" melding effectively with Sirkis. Bettison's harmonica playing really shines too, as it did on Journey; it's the central feature of "Senses," its gentle and soft-edged tone complements Meier's metallic guitar sound to give the tune a more romantic feel.

It's the acoustic tunes that really stand out, however. Meier must be one of the most lyrical and affecting acoustic guitar players there is, with a technical precision that leaves many more established players standing in his wake. He also demonstrates an economy that ensures every note has impact. There is never any sense that Meier is simply showing off his technical ability; if a phrase only needs four or five notes, he only plays four or five notes.

The acoustic trio moves expertly between influences: flamenco on the beautiful "Lavender" and "Andalucia," with Garcia's percussion setting the mood; Eastern and Asian on "Yuz," with Minervini creating a beautifully fluid rhythm; and Western classical on the delicate "Sharing." While these influences are recognizable, they are simply starting points for Meier's own imaginative playing. Johnny Green's "Body and Soul" shows just how effectively Meier uses his influences. Opening with flamenco-style guitar, Meier then moves seamlessly into the classic melody with more than a passing hint of Django Reinhardt to his approach.

Breeze enhances the reputations of everyone involved in its production. Meier's undoubted mastery of his chosen instruments is clear, but there is more to his playing. Meier combines this mastery with an ability to connect emotionally with the music and, in so doing, ensures that Breeze stands out for its warmth and humanity—in the end, a far more important quality.