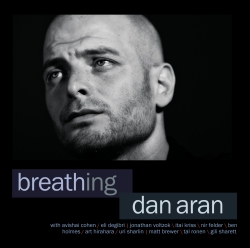 When a CD is released, one of its most revealing aspects—and that of the artist's mindset during the recording process—is the title that has been assigned. With a title like Breathing, there are several things that can be presupposed: first, maybe the artist recorded the album in a stiflingly hot space and the title was chosen for its irony; second, perhaps making the music was as effortless a process as breathing; or third, it's possible that the process of creating the music was so essential to life that it ranked as being, in the artist's mind, as necessary as the need to breathe. Whatever rationale, Jerusalem-born drummer Dan Aran's debut as a bandleader is a breath of fresh air.

What sustains Aran's proverbial breathing is the support he receives from a highly skilled group of musicians, along with a good selection of music. Featuring only four of his own compositions, Aran's approach to recording is that of a man with no ego or pretense—the best music gets featured here whether it was composed under Aran's pen or someone else's. With standout performances occurring on "Sun Bath," "Schnozel," "I'm So Blue," "Riva," "I Concentrate on You," "Tenderly," and "Gul Lihibib" the music is understated yet present. There are no overly dramatic flourishes or grand gestures played on the recording, in fact, Aran probably has the softest stroke of any drummer on the jazz scene today, but with contributions from a talented band of musicians that includes pianist Art Hirahara, trumpeter Avishai Cohen, bassist Matt Brewer, trombonist Mario Forte and tenor saxophonist Ted Nettelbeck, he has fashioned a solid supporting cast that helps make the music hard to ignore.

Aran and his band rise to every challenge and don't disappoint, regardless of the context. Some songs are played in a more traditional manner ("I'm So Blue" and Cole Porter's "I Concentrate on You"), while others feature interesting additions that uniquely change tradition, such as the inclusion of Gili Sharett's bassoon on "Tenderly." Aran's original music is performed in a manner that merges his creative vision with his heritage and respect for jazz history on "Sun Bath," "Schnozel" and "Riva," while "Gul Lihibib" is performed with a Middle Eastern flair.

Recordings like Breathing are good reminders of what's great about jazz. When artists have a vision for their music, and a respect for where the music has been and where it's going, that artist gives the jazz body one breath, one chance at life. Jazz cannot survive on the success of one artist alone; it is a community. Jazz is a culture that represents life, and needs artists like Dan Aran to help it breathe a little easier.