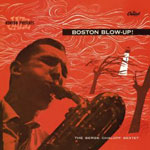 Baritone saxophonist Serge Chaloff lived a short, often ugly and painful life. A hard-line, nodding off, ankle-scratching junkie with bad personal hygiene problems, he died horribly at the age of 34. Yet he was a master of his cumbersome instrument and capable of creating music of extraordinary beauty.

Boston Blow-Up!, made in 1955 as part of bandleader Stan Kenton's "Kenton Presents" series, is one of Chaloff's finest recordings. In some ways it's better even than the iconic Blue Serge, made the following year, which presented him in front of a trio comprised of Sonny Clark (piano), Leroy Vinnegar (bass) and Philly Joe Jones (drums).

By contrast, Boston Blow-Up! places Chaloff somewhere nearer his big band roots—he'd worked, most famously, with Woody Herman in the late 1940s, and was a member of that band's Four Brothers saxophone quartet—in a three horns-led sextet which frequently sounds like a band twice its size.

Chaloff's key collaborators on the sessions are alto saxophonist Boots Mussulli and trumpeter Herb Pomeroy, both graduates of the Stan Kenton orchestra, who between them composed and arranged most of the tunes. Music lovers will be reassured to learn that precisely none of Kenton's ponderous, wannabe-Wagnerian aesthetic appears to have rubbed off on any of the players, and in particular the arrangers. The band, though based in Boston and recorded in New York, sounds like a West Coast lineup of the era, all light and airy arrangements over a loosely but energetically swinging rhythm section. Most of the tunes feature through-arranged horn charts, little big band style. The sound puts you in mind of Art Pepper's Los Angeles dates with ten or eleven-piece bands.

Much of the album is up-tempo, extroverted and infectious, but two of the most memorable tracks are ballads: "What's New" and "Body And Soul" both feature delightfully gentle and intimate bass register baritone work. "Body And Soul" includes what is possibly Chaloff's most emotionally touching recorded solo, alternating softly spoken passages with gruffer, rougher moments.

A predominantly happy, sunny album, and a very worthwhile reissue from a troubled master.